Walker declared that “America is the greatest country in the world” in a tweet. Walker believes this because of America’s civil liberties, which in his view allow people “to speak and think” for themselves. 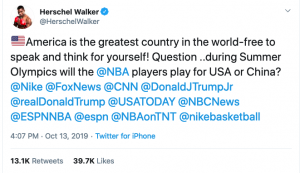 He then posed the question “during Summer Olympics will the @NBA players play for USA or China?”

Walker is referring to the upcoming Olympics which will be taking place in Tokyo in the summer of 2020.

The NBA has been recently caught in a web of controversy since Houston Rockets General Manager Daryl Morey took down his pro-Hong Kong protester tweets.