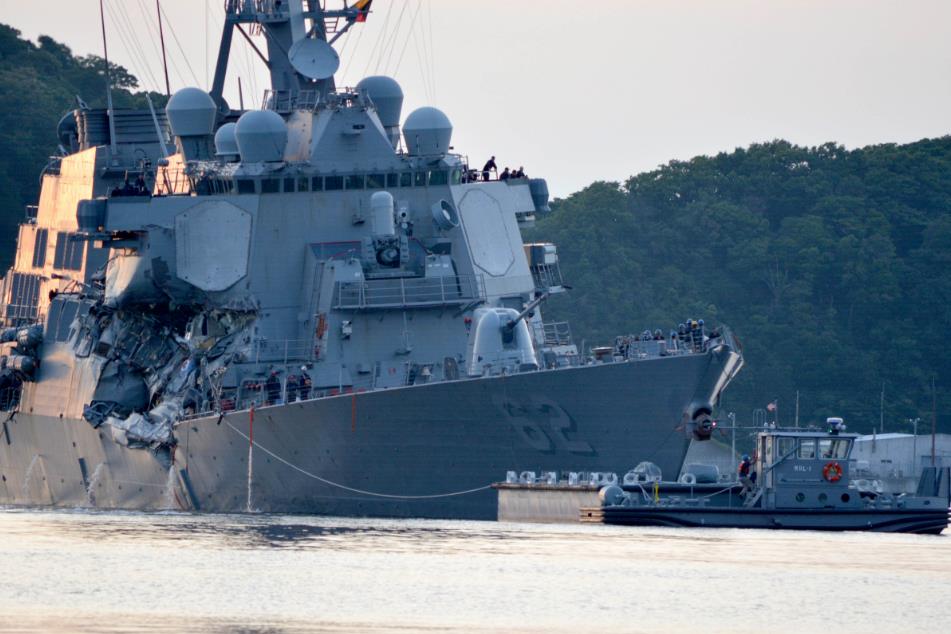 The deadly collision between a U.S. destroyer and a container ship June 17 took place while the freighter was on autopilot, according to Navy officials.

The Philippines-flagged cargo ship ACX Crystal was under control of a computerized navigation system that was steering and guiding the container vessel, according to officials familiar with preliminary results of an ongoing Navy investigation.

Investigators so far found no evidence the collision was deliberate.

Nevertheless, an accident during computerized navigation raises the possibility the container ship’s computer system could have been hacked and the ship deliberately steered into the USS Fitzgerald, an Arleigh Burke-class guided missile destroyer.

A more likely explanation is that collision was the result of an autopilot malfunction, or the autopilot’s warning signals, used to notify the ship’s operators, were missed.

The destroyer was severely damaged when the protruding undersea bow of the cargo ship struck Fitzgerald on the right side. Seven sailors died as a result and the captain and two others were injured. It was the Navy’s worst accident at sea.

The two ships hit about 64 miles off the coast of Japan.

The collision occurred at around 1:30 a.m. local time but was not reported by the freighter’s crew until around 2:25 a.m. Investigators believe the time lag was the result of the crew not realizing they had hit another ship.

Commercial ship autopilot systems normally require someone to input manually the course for the ship travel. The computer program then steers the ship by controlling the steering gear to turn the rudder.

The system also can be synchronized with an electronic chart system to allow the program to follow courses of a voyage plan.

Tracking data broadcast from the Crystal as part of the Automatic Identification System (AIS) shows the ship changed course by 90 degrees to the right and slightly reduced its speed between around 1:32 a.m. and 1:34 a.m. After that time, the data shows the ship turned to the left and resumed a northeastern coarse along its original track line.

Private naval analyst Steffan Watkins said the course data indicates the ship was running on autopilot. “The ACX Crystal powered out of the deviation it performed at 1:30, which was likely the impact with the USS Fitzgerald, pushing it off course while trying to free itself from being hung on the bow below the waterline,” Watkins told the Free Beacon.

The ship then continued to sail on for another 15 minutes, increasing speed before eventually reducing speed and turning around. “This shows the autopilot was engaged because nobody would power out of an accident with another ship and keep sailing back on course. It’s unthinkable,” he added.

Watkins said the fact that the merchant ship hit something and did not radio the coast guard for almost 30 minutes also indicates no one was on the bridge at the time of the collision.

By 2:00 a.m., the freighter had turned around and headed back to the earlier position, according to the tracking data.

The officials said the Crystal eventually came upon the stricken Fitzgerald.

The Fitzgerald’s AIS data was not available so its track was not reported publicly.

Chief of Naval Operations Adm. John Richardson traveled to Japan to oversee the transfer of the fallen sailors.

“There are multiple U.S. and Japanese investigations underway to determine the facts of the collision,” Richardson said in a statement. “Our goal is to learn all we can to prevent future accidents from occurring. This process will unfold as quickly as possible, but it’s important to get this right.”

According to the officials who spoke on condition of anonymity, initial reports on the incident indicate no crew member was manning the controls in the pilot house of the Crystal when it hit the Fitzgerald.

After impact, the freighter’s was not immediately aware that it had collided with anything and continued sailing. The ship’s crew then realized it had been in a collision and sailed back to try to determine what had happened.

Transport safety authorities and coast guard investigators in Japan on Thursday announced the data recorder from the Crystal had been secured, the Associated Press reported. The freighter is currently docked in the port of Yokohama, near Tokyo.

The Navy and Coast Guard are investigating the incident. The Fitzgerald is currently at its home port of Yokosuka naval base.

The investigation is expected to be completed in several months.
For the Navy, investigators are trying to determine why the ship’s radar and other sensors did not detect the Crystal in time to take steps to avoid the collision.

The Fitzgerald is equipped with the AN/SPS-64 advanced military navigation radar, and also uses a commercial radar system to enhance the shipping traffic picture of ships in its vicinity.

Navy ships operate radar systems to detect approaching ships or submarines. Lookouts posted on the bridge are responsible for detecting ships that pose a risk of collision.

Additionally, all commercial ships over 300 tons are required under international rules to operate AIS location data. AIS information from Crystal should have been monitored by sailors on the bridge of the Fitzgerald.

The sailors aboard the 505-foot-long Fitzgerald waged what officials said was a heroic battle about the ship to seal off flooding after the collision.

“We were struck by the stories of heroism and sacrifice—by both the sailors on board and their families back home—as they fought the damage to their ship and brought her back to Yokosuka,” Richardson said.

The ship was not in danger of sinking but was listing to one side and was able to remain under its own power.

The bodies of the seven dead sailors were found in sealed off areas of the ship on Sunday after it reached port.

Vice Adm. Joseph Aucoin, commander of the U.S. 7th Fleet told reporters the Fitzgerald suffered extensive flooding and damage caused by a large puncture below the waterline on the starboard side underneath the pilot house.

The ship’s commander, Cmdr. Bryce Benson was airlifted by Japanese coast guard helicopter. Two other injured sailors also were evacuated. All appear to have injuries that are not life threatening.

The officials said Benson was in his stateroom at the time of the collision.

The Fitzgerald was commissioned in 1995 and has a crew of some 300 crew members. It has a top speed of 30 knots and is armed with Tomahawk cruise missiles, SM-1 anti-ship and anti-submarine missiles, as well as machine guns and torpedoes.

The Crystal was built in South Korea, is 730 feet long and capable of carrying up to 2,858 shipping containers.

The Crystal is classified as a mid-size container ship part of the Asia Container Express or ACX, an Asian container shipping trade subsidiary of NYK Line, a global shipping division of Japan’s Mitsubishi.