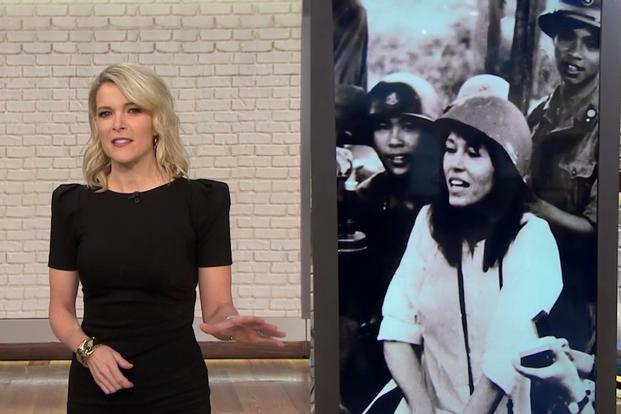 Last September 27, on the third day of Megyn Kelly Today, Jane Fonda got bent out of shape when the eponymous host mentioned Fonda’s rather extensive plastic surgery, thanks to which she looks (in the right light and makeup) almost half her age. Since then, Fonda has publicly mentioned the interview more than once, and has not disguised her irritation. In a  held at the Sundance Film Festival and published in Variety on January 20, Fonda said that Kelly’s question about plastic surgery hadn’t “upset” her; it had “stunned” her. “It was so inappropriate,” Fonda said. “It showed that she’s not that good an interviewer. But if she comes around and learns her stuff, sure.”

Two days later, staring straight into the camera on her show, Kelly shot back. “Fonda was on to promote a film about aging,” she said. “For years she has spoken openly about her joy in giving a cultural face to older women. Well, the truth is, most older women look nothing like Fonda, who is now eighty. And if Fonda really wants to have an honest discussion about older women’s cultural face, then her plastic surgery is tough to ignore.” Kelly then played snippets of other interviews in which Fonda had openly discussed going under the knife. Why, then, Kelly asked, was the topic “suddenly off limits” in an interview about “a film about aging”?

But Kelly went further. Responding to Fonda’s statement that Kelly’s question had been “inappropriate,” Kelly pronounced that she was not

in the market for a lesson from Jane Fonda on what is and is not appropriate….Look at her treatment of our military during the Vietnam War. Many of our veterans still call her “Hanoi Jane” thanks to her radio interviews in which she attempted to shame American troops. She posed on an anti-aircraft gun used to shoot down our American pilots. She called our POWs hypocrites and liars and referred to their torture as “understandable.” Even she had to apologize years later for that gun picture. But not for the rest of it. By the way, she still says she is not proud of America. So the moral indignation is a little much…She has no business lecturing anyone on what qualifies as offensive.

Kelly was 100% correct. But instead of admitting that she had a point about Fonda’s past, the ladies on The View gave Kelly grief. Sunny Hostin (whoever that is) said she’d “never seen a journalist do something like that.” Do what? Criticize somebody’s politics? For a year, the entire mainstream news media has been accusing the President of imaginary offenses; at least Kelly’s assault on Fonda was fact-based. Ann Curry, doing a guest stint on The View, replied to Hostin: “The reason you don’t see it is because journalists aren’t supposed to be the story. We’re supposed to be humble.” Humble? When was the last time you saw a humble journalist? Where’s the humility in the White House press room? Perhaps what Curry meant is that “journalists” such as herself and Kelly and the View gang, whose main job is to conduct cozy, all-but-scripted celebrity interviews, are supposed to approach those deities with deference. In the eyes of Curry, apparently, helping actors plug their projects counts as journalism – but honestly addressing those actors’ politics does not.

As for the View veterans, Whoopi Goldberg and Joy Behar, they out-and-out lied, claiming that Fonda had apologized repeatedly for going to North Vietnam. On the contrary: as Kelly pointed out, Fonda had only apologized for posing for that infamous picture. She’s expressed pride for having gone to North Vietnam. And let’s make one more thing clear: it’s utterly misleading to say, as they did, that Fonda engaged in “anti-Vietnam War activism.” What she was pursuing was anti-American activism. As has often been said, Fonda wasn’t against the war – she was on the other side. She named her son Troy Garity after a Viet Cong bomber, Nguyen Van Troi; decades after the war, she sang the praises of Fidel and Che.

The hens on The View weren’t the only ones to stick up for – and lie for – Fonda. “While in Vietnam,” wrote Time‘s Mahita Gajanan, “Fonda appeared on 10 radio programs to speak out against the U.S. military’s policy in Vietnam and beg pilots to cease bombing non-military targets.” Yes, and she also – as Kelly noted – called POWs liars and defended their torture. Gajanan maintained that “the antiwar feeling Fonda came to embody was relatively widespread among the American population at the time.” Opposing a war is one thing; supporting the enemy is another. Fonda, claimed Gajanan, has “clarified that her actions during the Vietnam War were in protest of the U.S. government and not against soldiers.” That’s not clarification – that’s rewriting history. (But let’s not blame Gajanan too much – as her Linked In page indicates, she’s less than three years out of college. This is who’s writing for Time Magazine these days.)

Reportedly, Kelly’s bosses at NBC weren’t happy with her assault on Fonda. No surprise there: this is the same network that chose not to broadcast Ronan Farrow’s exposé about Harvey Weinstein, which, when published in The New Yorker, pulled back the curtain on sexual exploitation and moral hypocrisy in Hollywood. That’s what Kelly was doing, too, in her remarks about Fonda: addressing Hollywood’s moral hypocrisy. Indeed, the only legitimate critique of Kelly’s remarks is that they didn’t begin to capture the scale of the hypocrisy embodied by Jane Fonda – this Barbarella feminist, this member of a Tinseltown dynasty who loves to play rebel, this self-styled revolutionary socialist who wed a multibillionaire.

Oh, by the way, I just saw the movie Fonda was promoting on Megan Kelly Today last September. It’s called Our Souls at Night, and it’s available on Netflix. It’s very sweet.