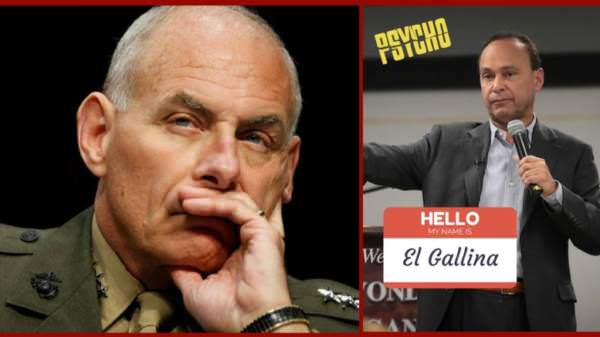 In an email to Fox News, White House Chief of Staff John Kelly responded to Rep. Luis Gutierrez (D-IL), who called the General a “disgrace to the uniform.”

In an email to Fox News late Sunday, Kelly responded by saying Congress did “nothing” to help so-called Dreamers when they had the chance.

“As far as the congressman and other irresponsible members of congress are concerned, they have the luxury of saying what they want as they do nothing and have almost no responsibility,” Kelly said. “They can call people liars but it would be inappropriate for me to say the same thing back at them.  As my blessed mother used to say ‘empty barrels make the most noise.’”

He concluded, “The congressman has a right to his opinion.”

Gutierrez was arrested last month, along with 30 other protesters, outside of the White House during a DACA rally.

Democratic Rep. Luis Gutierrez of Illinois was arrested along with roughly 30 fellow protesters outside the White House during a gathering commemorating the fifth anniversary of the Deferred Action for Childhood Arrivals (DACA) program.

The protesters were arrested for sitting on the sidewalk outside the White House after attending a rally in Lafayette Square across the street, according to The Hill. Gutierrez, a well-known immigration advocate, defended the protest shortly before his arrest.

“The same values that I inculcated in my daughters, that my wife and I raised them, [Dreamers] are an example and exemplify them. Their dreams are just like my kids’ dreams,” Gutiérrez told The Hill shortly before his arrest.

This isn’t the first time Rep Gutierrez has been arrested. As TGP previously reported, Gutierrez was handcuffed at a Chicago ICE ‘Sit-in’ back in March. He said the handcuffs were taken off after law enforcement ‘changed their minds’.