So, while these Democrats are not students of history and while others have very short memories, there is a long history pertaining to all of this immigration crisis. You see, a few years ago, I read a book titled From the Shadows, written by former CIA Director Robert Gates. Gates was also the Secretary of Defense as part of his long government service resume. He wrote that book in 1996. A particular page stayed in my memory and I did a search in my Book Nook today to find it. 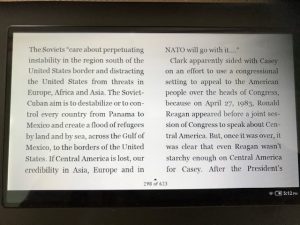 Okay, is there more? Yes. There are so many moving parts to the legacy immigration crisis today. Who is to blame? Too many it seems. But for context read on, history does repeat itself.

Going back to an article/summary from 2006, how did we get to this cockamamie asylum policy? It goes to a crisis that was born in 1980.

Citation: The year 1980 marked the opening of a decade of public controversy over U.S. refugee policy unprecedented since World War II. Large-scale migration to the United States from Central America began, as hundreds of thousands of Salvadorans, Guatemalans, and Nicaraguans fled north from civil war, repression, and economic devastation. That same year, in the last months of the Carter administration, the U.S. Congress passed the Refugee Act, a humanitarian law intended to expand eligibility for political asylum in the United States.

The Refugee Act brought U.S. law into line with international human rights standards, specifically the 1951 UN Convention and the 1967 Protocol Relating to the Status of Refugees. The United States had ratified the Protocol in 1968, thus becoming bound by the Convention’s provisions. While the previous law recognized only refugees from Communism, the Refugee Act was modeled on the convention’s non-ideological standard of a “well-founded fear of persecution.”

The coincidence of the Central American exodus with the passage of the Refugee Act set the stage for a decade-long controversy that ultimately involved thousands of Americans. The protagonists in the controversy included, on one side, immigrants’ rights lawyers, liberal members of Congress, religious activists, and the refugees themselves. On the other side were President Reagan and his administration, the State Department, the Department of Justice (including the Immigration and Naturalization Service (INS) and the Federal Bureau of Investigation (FBI)), and conservative members of Congress. The first group invoked international human rights and humanitarian and religious principles, while the Reagan administration’s arguments centered on national security and the global fight against Communism.