The Observer has gained access to a secret hitlist of almost 100 prominent individuals targeted by Harvey Weinstein in an extraordinary attempt to discover what they knew about sexual misconduct claims against him and whether they were intending to go public.

The previously undisclosed list contains a total of 91 actors, publicists, producers, financiers and others working in the film industry, all of whom Weinstein allegedly identified as part of a strategy to prevent accusers from going public with sexual misconduct claims against him.

The names, apparently drawn up by Weinstein himself, were distributed to a team hired by the film producer to suppress claims that he had sexually harassed or assaulted numerous women.

An extract from Harvey Weinstein’s hitlist: 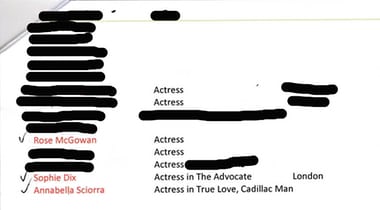 The document was compiled in early 2017, around nine months before the storm that blew up on 5 October when the New York Times published a series of sexual harassment allegations against Weinstein.

Individuals named on the list were to be targeted by investigators who would covertly extract and accumulate information from those who might know of claims or who might come forward with allegations against the film producer. Feedback was then to be relayed to Weinstein and his lawyers.

The size of the list – 85 names appear on one document, with an addendum identifying another six individuals – appears to corroborate claims that sexual misconduct allegations against the 65-year-old were an open secret throughout Hollywood.

Prominent stars were among the first tranche of individuals on the list to testify publicly against Weinstein. Among those named were the actress Rose McGowan, who days after speaking out accused the producer of raping her. Another was Laura Madden, who told how Weinstein pestered her for massages at hotels in Dublin and London, beginning in 1991. McGowan and Madden were among the first to speak out against Weinstein last month.

A typed note on the document appears to suggest that by February 2016, Madden had already been targeted by one of Weinstein’s hired investigators. Her view of the producer is, says the note, “very bitter”.

Another name is Zelda Perkins, a London-based production assistant for Weinstein’s Miramax film company, who left the firm’s London offices on Brewer Street in Soho in 1998 after, she says, enduring years of sexual harassment by her boss. Last month Perkins revealed that she had broken a confidentiality agreement to describe alleged sexual harassment by the Hollywood producer.

Also on the list is the English actress Sophie Dix, who has described how her career trajectory was “massively cut down” after an alleged sexual assault by Weinstein in a London hotel and who was among the first to come forward.

Although at least 10 individuals are based in London, the majority live in New York, with others from Los Angeles. They include individuals working in acquisitions, marketing and distribution, along with producers, publicists and human resources staff, as well as actors. Forty-three men are named and 48 women.

Weinstein, the list confirms, was aware that the New York Times was gathering testimony from his victims long before it first ran the story. A public relations professional is named alongside a note stating that “HW [Harvey Weinstein] in contact w/him. Friends w/Jodi Kantor”. Kantor is the New York Times journalist who broke the story that immediately engulfed the producer and the film production company he co-founded with his brother.

More than 50 of the names have been coloured red to highlight those who should be prioritised by investigators – individuals Weinstein most keenly wanted to target. The names of the actresses McGowan, Dix and Madden are all coloured red.

Following an initial list of 85 names, another six individuals were identified during August 2017, including the actress Annabella Sciorra, who two months later publicly alleged she was raped by Weinstein after he barged into her apartment in the 1990s.

Also named on the later list is the US actress Katherine Kendall. Weeks later she revealed how a naked Weinstein “literally chased” her around his New York apartment in 1993.

Another is a former Weinstein employee, Lauren O’Connor, who documented several allegations against the producer in a 2015 memo in which she described a “toxic environment for women” at Miramax.

Interestingly, the document includes the filmmaker Brett Ratner, who has been accused of sexual harassment or misconduct by six women in the wake of the Weinstein allegations.

It is unclear whether Weinstein intended subsequently to approach any of the individuals on the list with a non-disclosure agreement. Evidence has emerged which shows that over the past three decades Weinstein reached at least eight settlements with women, according to two company officials speaking on condition of anonymity, after he was confronted with allegations including sexual harassment and unwanted physical contact.

Not surprisingly, considering the psychological abuse and bullying allegations emerging from his former film studio Miramax, more of the film studio employees are also named. Among them is Kathy DeClesis, former assistant to Weinstein’s brother Bob, who has revealed that she told him about Harvey sexually harassing women over a period of 25 years.

So far, more than 50 women have come forward with allegations of rape, harassment and inappropriate behaviour, prompting police investigations in the US and UK.

Weinstein “unequivocally denies” all claims of non-consensual sex, a spokesman for the producer has said. The spokesman dismissed reports that the producer hired spies to stop claims, saying: “It is a fiction to suggest that any individuals were targeted or suppressed at any time.”

The producer’s alleged targets were often young, aspiring actresses. Among the high-profile names who have spoken out against Weinstein are Angelina Jolie, Cara Delevingne and Kate Beckinsale.