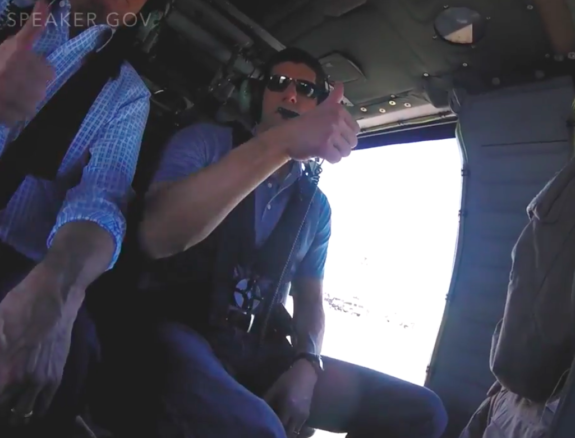 From the moment Donald Trump stormed the political scene, the real estate billionaire had the GOP establishment shaking in its boots. Since Trump announced he was running for president, Speaker Paul Ryan has been one of the conductors steering the Never Trump train. Everything Ryan does in support of President Trump should be taken with a grain – very large grain – of salt. On Tuesday, Ryan released a video advocating for President Trump’s border wall. Has hell frozen over or is Ryan paying lip service to the wall he is secretly trying to kill?

The video begins with Ryan entering a helicopter overseeing the Rio Grande Valley in Texas. “1,954 miles along America’s Souther border. It’s time for the wall”, reads the intro text.

“I had the opportunity to travel down to Texas to the Rio Grande Valley to spend time with our border patrol. When you see what they’re up against, it really gives you an even greater respect for what they do. They clearly need more tools, more support to do their job, effectively. That’s why we’re going to get this done, this week.”

The U.S. Department of Homeland Security said on Tuesday it would waive environmental and related laws in order to expedite building security-related barriers and roads along the nation’s border with Mexico near San Diego.

The projects would focus on about 15 miles (24 km) of the frontier extending eastward from the Pacific Ocean as part of President Donald Trump’s planned wall between the United States and Mexico, the DHS said in a statement. It said the area is one of the busiest U.S. border sections.

“The sector remains an area of high illegal entry for which there is an immediate need to improve current infrastructure and construct additional border barriers and roads,” the DHS said.

The department will oversee the installation of extra barriers, roads, lights, cameras and sensors on the border under the authority of the Illegal Immigration Reform and Immigrant Responsibility Act (IIRIRA) of 1996, the statement said.

The act grants the secretary of homeland security authority to waive requirements to comply with various laws to ensure the building of barriers and roads, while being mindful of cultural and environmental impacts, the statement said.