The regulatory accounting coincides with the release of the Unified Agenda of Regulatory and Deregulatory Actions, which outlines the rulemaking plans for federal agencies in the coming fiscal year.

In her introduction to the new agenda, Neomi Rao, administrator of the Office of Information and Regulatory Affairs, said, “[I]n modern times, the expansion of the administrative state has placed undue burdens on the public, impeding economic growth, technological innovation, and consumer choice. … Our reform efforts emphasize the rule of law, respect for the Constitution’s separation of powers, and the limits of agency authority.”

Trump has pledged to “massively” reduce regulation, and he has so far significantly slowed regulatory output. 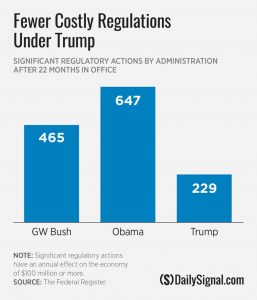 Ten days after taking office, he issued Executive Order 13771, which requires agencies to offset the cost of any new significant regulation (or guidance) with at least two deregulatory actions. The executive order also established a regulatory budgeting system under which the Office of Management and Budget assigns to agencies a cap on the amount of “incremental costs” that will be allowed for the fiscal year.

The Office of Information and Regulatory Affairs projects that the fiscal year 2019 caps will reduce regulatory costs, on net, by $18 billion (in present value). In addition, the administration has proposed a range of options for revising the Corporate Average Fuel Economy Standards and greenhouse gas emissions standards that are projected to save between $120 and $340 billion. And other deregulatory actions are in process, including a rollback of the Obama administration’s signature global warming regime.

To put that in perspective, annual regulatory costs under the Obama administration increased by $122 billion, according to analyses by The Heritage Foundation.

The regulatory budgeting established in Trump’s Executive Order 13771 is intended to inject a modicum of economic discipline into rulemaking. If agencies are compelled to restrict the costs imposed on the public, they must engage in a type of rolling retrospective review of the vast accumulation of rules that comprise more than 185,000 pages in the Code of Federal Regulation—up from some 138,000 in 2000.

Under guidance from the Office of Management and Budget, only “significant” regulatory actions (rules and guidance documents) count toward the cap. However, offsetting costs may be derived from a broader set of deregulatory actions that would result in a net savings, including rules and guidance; streamlined record-keeping and reporting requirements; and some actions related to international regulatory cooperation.

According to Office of Information and Regulatory Affairs data, the administration has achieved $33 billion in net regulatory savings since taking office.

Most independent agencies such as the Securities and Exchange Commission and the Consumer Financial Protection Bureau are not subject to Executive Order 13771 despite the fact that they impose enormous regulatory costs on the public.

Read the full story from The Daily Signal