Speaking at the University of Michigan’s Gerald R. Ford’s School of Public Policy on Thursday, Clinton once again whined that she didn’t lose the 2016 election because of how unlikable she is — but because of Russians.

The ads purchased by Russians were unsophisticated at best and downright cheesy at worst. If Clinton thinks they cost her the election, she must really underestimate the American public.

Here are a sample of Facebook posts promoted by Russians during the 2016 election: 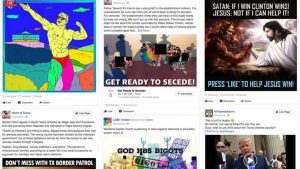 During her speech, Clinton told the crowd that she is very “disappointed” that Big Tech isn’t doing enough to support “free and fair elections.” Apparently, people being able to communicate is deeply unfair to her.