In a stunning act of ignorance and stupidity, Houston Mayor Sylvester Turner proclaimed an annual day to celebrate the Council on American-Islamic Relations (CAIR) by making December 9, 2018  “CAIR-TEXAS, Houston Day”. 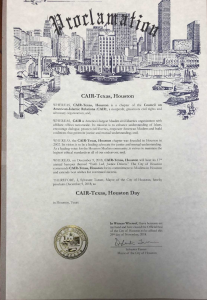 The Council for American Islamic Relations (CAIR) claims to be “America’s largest Islamic civil liberties group,” but in 2007, the U.S. government labeled CAIR a co-conspirator in the Holy Land Foundation terrorism trial for financing HAMAS.

Along with being classified as a terrorist organization in the United Arab Emirates in 2014, CAIR has been labeled as a Muslim Brotherhood entity by the United States Justice Department and was found by a federal judge, the U.S. Attorney Generals office, and the Fifth Circuit Court of appeals as having direct ties to Hamas.