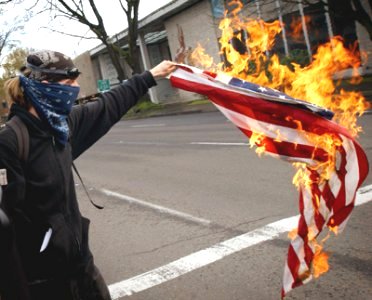 More and more liberal college students are openly acknowledging their hatred for the American flag and what it represents. In a shocking new video, documentary filmmaker Ami Horowitz asks students on the campus of UC Berkeley –one of America’s most left-wing universities- their opinions on the ‘Stars and Stripes,’ and you won’t believe what they have to say.

“Sadly, there’s been a lot of controversy around some of our American symbols, like the national anthem, so I went to UC Berkeley to see what the reaction would be to another national symbol, the American flag,” says Horowitz.

The filmmaker then travels to Berkeley, California; chanting pro-American slogans and asking passing students what they think of the US flag and America in general.

“No, the complete opposite,” says one student. “It’s the one imperial power right now in the world,” responds another.

In a staggering experiment, the documentarian then hoists the black-flag of ISIS, calling for the end of America and denouncing “western imperialism.” Shockingly, only one student is offended.

“The black flag of ISIS will stand over the White House,” screams Horowitz.

“Good for you man, good for you,” says one student.