Believe it or not, an incredibly powerful article about health policy mentions the word “medical” once only in passing, and “health” not at all. On Thursday, Politico ran a feature article on the University of Michigan, and how it—and many other prominent public universities—face a “crisis of confidence.” In seeking to attract affluent, and frequently out-of-state, students, these institutions have shunned working-class families, many of whom no longer feel welcome, or try to apply.

The crisis of confidence stems largely from public universities’ financial strategies. That’s where health care comes in, in a big way. Medicaid’s constant, inexorable growth in state budgets has left less money for education of all types, not least higher education. As Medicaid spending has risen, state funding of public universities has declined, leading them to raise tuition and increase their percentage of out-of-state students to help balance the books. At the end of this fiscal game of “Musical Chairs,” many children from working-class families can’t find a proverbial seat at a top-tier institution.

Call it the seedy underbelly of Medicaid’s exponential growth. No one has said so in as many words—no one dare would—but the effect amounts to the ruling class telling the working class the following: “Because we’re spending so much of our state budget on Medicaid, we’re limiting your access to quality education. We’re restricting your ability to get a good job, earn a better living, rise and improve your station in life, and achieve more than your parents ever felt they could. But, hey, many of you will get ‘free’ health care thanks to the Medicaid expansion. So have a nice life.” 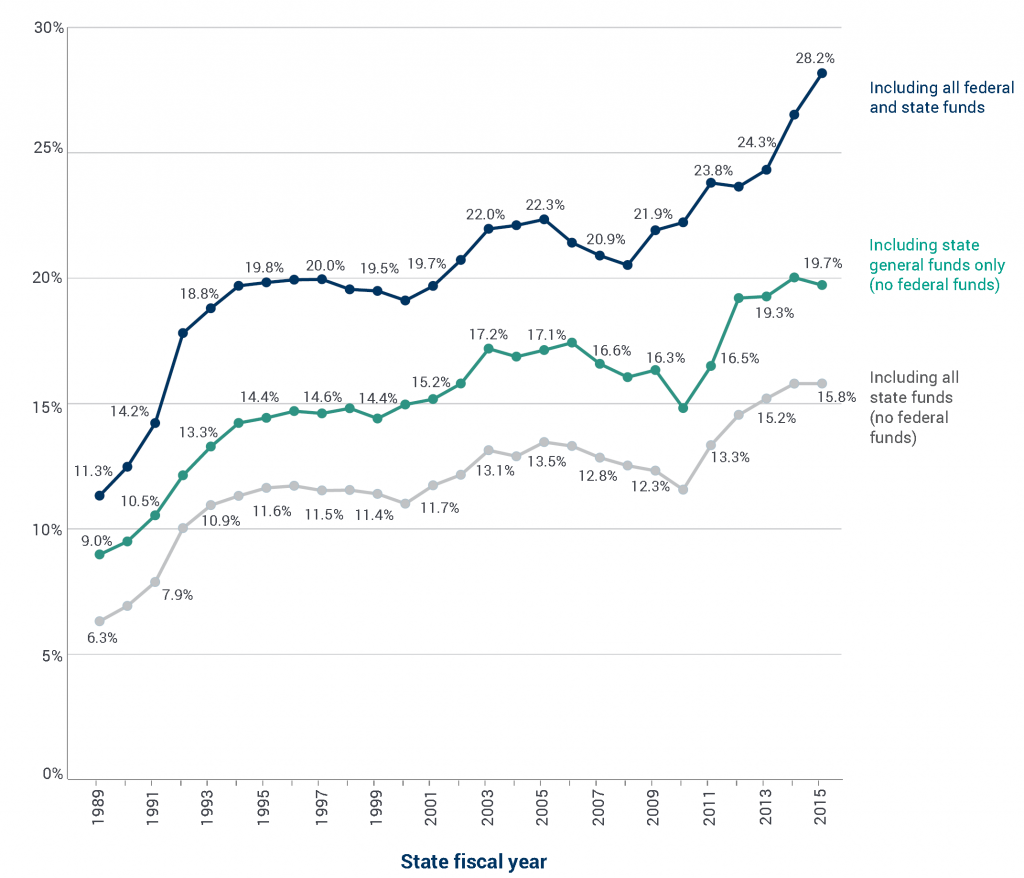 How This Affects Americans

In Michigan, universities have taken it on the chin more than in most states. Primary and secondary education comprise a relatively large percentage of the state’s budget, making the share of spending on post-secondary education (4.3 percent) less than half the national average. Politico explains the effect on the University of Michigan and its students:

In the late 1960s, the state covered 70 percent of instructional costs. By the late 1990s, state support covered less than 10 percent of instructional costs, which were largely unchanged when adjusted for inflation. The trend has persisted. One recent report found that, since 2002, state support for higher education in Michigan has declined 30 percent, when adjusted for inflation.

The university, like nearly every other state school in the nation, leaned on tuition to make up the difference. In-state tuition rose, but university leaders also focused on another, more lucrative, funding stream: out-of-state students, many of them elite students from wealthy families who couldn’t get into the Ivy League. Michigan was the next best thing.

“The university had no choice but to increase out-of-state enrollments of students paying essentially private tuition levels,” [former University of Michigan President James] Duderstadt said. Tuition rose to $14,826 a year for Michigan students; room and board adds about $12,000. In the 1970s, tuition was less than $600 per year. Out-of-state students, who now pay $47,476 per year, make up roughly half of the student body at Michigan, up from 30 percent in the late 1960s.

The Congressional Budget Office (CBO) has indicated its belief that Medicaid itself discourages work. Specifically, CBO wrote that “expanded Medicaid eligibility under [Obamacare] will, on balance, reduce incentives to work.” Because an extra dollar of income could cause beneficiaries to lose access to Medicaid, costing them hundreds, even thousands, of dollars in insurance premiums and co-payments, some individuals will avoid work to keep their incomes below eligibility caps.

However, few have examined the way in which Medicaid can keep people in poverty not just from its direct effects (i.e., discouraging work), but by its indirect effects—the opportunity cost associated with state spending. Every dollar a state spends on Medicaid represents a dollar not spent on rescuing a student trapped in a failing school, or on scholarships for working-class families to attend top-tier universities.

Also, given the ways in which Politico framed the University of Michigan’s strategic and budgetary decisions as exacerbating inequality, it’s worth pondering to what extent Medicaid—which liberals claim reduces inequality—in reality, by resulting in cuts to education funding, worsens it. People forget about these opportunity costs, but they exist. Without even mentioning the word Medicaid, Politico delivered a stark reminder of the implications of this sprawling entitlement. Advocates who support the ever-growing nature of Medicaid should take heed.