OUTRAGEOUS! The House Impeachment Rules were updated on August 12, 2019 – this is the exact same day that Pelosi’s Democrats claimed they first received their whistleblower’s report!

The Conservative Treehouse reported that the House “Impeachment Process” memo was updated on August 12, 2019 –

View this document on Scribd 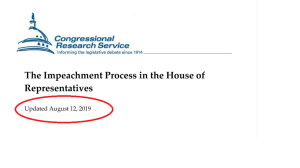 We don’t know yet what exactly was changed from the previous version but can point out some observations from the document.