An incoming Democratic congresswoman from Michigan has Tweeted twice in support of terminated CNN pundit Marc Lamont Hill, who was fired after he used a phrase commonly used when calling for the destruction of Israel.

“Calling out the oppressive policies in Israel, advocating for Palestinians to be respected, and for Israelis and Palestinians alike to have peace and freedom is not antisemitic,” said Rashida Tlaib on Twitter. “@CNN, we all have a right to speak up about injustice any and everywhere. @marclamonthill” 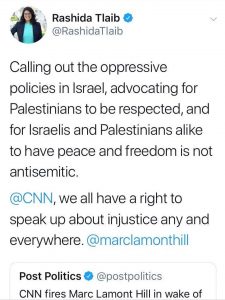 Except Hill did not simply advocate for “Palestinians to be respected.” He said that justice for Palestine a “free Palestine from the river to the sea,” which is a slogan used by anti-Semites, including terrorist organization, to call for the complete destruction of Israel.