Last week, Muslims all around the world celebrated Eid Al Adha, the Muslim “holiday” of sacrifice.

Traditionally, Eid is celebrated by slaughtering goats, cows, camels and sheep  in the streets to honor the  sacrifice Abraham was willing to make in the Koran when he murdered his own son.

Streets across the world were flowing red with blood as a result of the mass slaughter of animals in public places.

Graphic and disturbing pictures and videos captured the brutality of Eid-Al-Adha and the way animals are tortured and left to suffer and bleed to death at the hands of Muslims.

WARNING: The following images are graphic in nature. 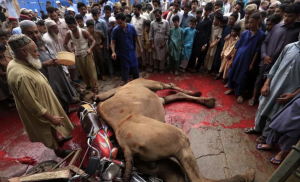 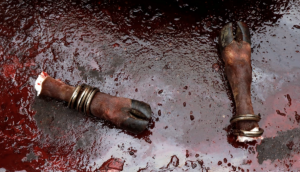 This year, Eid-Al-Adha coincided with the Hajjj pilgrimage from Medina to Mecca. Muslims celebrated by beheading cows and goats that were later dragged through the streets of Muslim countries including Pakistan, Iran, Bangladesh, and even the United States.