Another sleuth on the Internet uncovered some disturbing information in the Strzok and Page text messages.

The messages sent by corrupt FBI and former Mueller investigation team members Peter Strzok and Lisa Page appear to indicate that the FBI was trying to set up, attack or embarrass candidate Trump before the 2016 election. 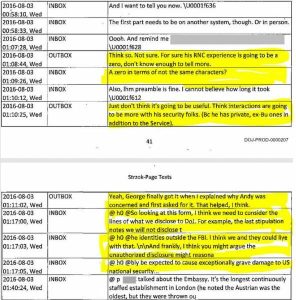 Is this what it looks like? In august of 2016 the 2 FBI lovebirds Page and Strzok were talking cloak and dagger. Here is the exchange. what stands out is Page saying “Think so. Not sure. For sure his RNC experience is going to be a zero, don’t know enough to tell more.” Strange!