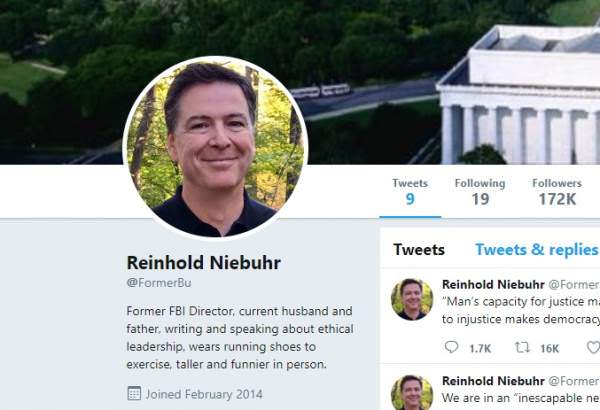 The former FBI director and leaker of classified material published his photo up at the Reinhold Niebuhr Twitter account.

As Critina previously pointed out a Twitter account by the name of Reinhold Niebuhr, run by former FBI Director James Comey, has been sending out a series of cryptic tweets over the last several days.

James Comey admitted that he was secretly on Twitter and Instagram. In March, Gizmodo figured out which account he was operating in stealth….well not so stealth anymore.

The name Reinhold Niebuhr popped up.

By senior year, Comey was a double major in religion and chemistry, writing a senior thesis on theologian Reinhold Niebuhr and televangelist Jerry Falwell and on his way to the University of Chicago Law School.

The name Reinhold Niebuhr ultimately led the investigation to the Twitter account which is usually protected from public viewing.

After a series of cryptic tweets, Comey actually posted 2 photos of himself to his Twitter account and even uploaded a profile picture.

Goodbye Iowa. On the road home. Gotta get back to writing. Will try to tweet in useful ways. pic.twitter.com/DCbu3Yvqt3

Good to be back in Iowa. pic.twitter.com/TGJHOhQ9KF

On Tuesday crooked cop James Comey posted his picture in the profile of the Reinhold Niebuhr Twitter account.

The arrogance of this man knows no bounds.