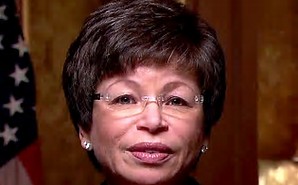 WASHINGTON – Valerie Jarrett, former senior advisor to President Obama, said the Trump administration is “abdicating” the United States’ role as the “world leader” and the “beacon of hope” by withdrawing from the Paris climate accord.

“It is unrefuted science that there are man-made consequences that are leading to the degradation of our planet. And it was unprecedented to have so many countries, nearly 200 countries from around the world, who followed the United States’ lead on this issue and came to the table and not just the government leaders but in our country, just hundreds and hundreds of large corporations signed on recognizing that it is not anti-business to care about our climate – it is not an either/or, it is a both and an imperative,” Jarrett said during a discussion sponsored by the Raben Group in D.C. last week.

“So I think it signals to the world that the United States is not serious about protecting our planet. Now, I don’t know what other way to interpret a decision that I think could be as dramatically negatively impactful as that decision. And what it means is the rest of the world will move forward without us and the United States has always been that beacon of hope, the leader, the world leader, that’s why we’re called the world leader and we’re basically abdicating that role, so that’s disappointing to me,” she added.

Jarrett expressed frustration when reflecting on Hillary Clinton’s loss in the 2016 presidential election.

“I’m still pretty ticked off that 43 percent of average voters did not vote in the last election,” she said, adding that it’s time to “ask ourselves” how to “instill” a livelong passion of being “good citizens” in young people.

Jarrett said she is worried about the GOP effort to repeal and replace Obamacare and does not view the issue of healthcare as political.

“What keeps me up at night is worrying about the moms who depend on ACA for all of the preventive care and not to mention prenatal care, the wellness visits and the cost of delivery,” she said. “I mean, the Affordable Care Act is now a part of the fabric of our country and part of why I think we’re seeing the kind of response we are to taking it away, is because people are now living with the benefits and I don’t know anybody my age who doesn’t have a pre-existing condition. But there are children with pre-existing conditions as well.”

She recalled Obama telling her that nothing, not even his 2008 election night victory, could compare to when Congress passed the ACA.

“Election night was all about getting to tonight,” Obama told her at the time.

“I am not sure why it ever became a political issue. What’s wrong with everyone in our country having affordable healthcare? Why is that a bad thing? That should be a celebrated, good thing,” Jarrett told the audience.

Jarrett was asked for her opinion of Ivanka Trump’s role in White House and if she thinks the first daughter should have that much power and influence.

Jarrett explained that Obama created a “culture” in the White House where advisors felt “comfortable telling him the truth” and telling “each other the truth.”

“If I had to tell him anything he would take issue with, I had to be prepared because he would inevitably push back,” she said.

Jarrett recalled waking up every day “scared to death” because she had an “awesome job” with “huge responsibilities” as a senior advisor in the White House.

When asked if she had a piece of advice for President Trump, she replied, “I’m not in the business of giving advice to presidents anymore.”

As for her future plans, Jarrett told the audience she intends to write a book and continue her advocacy for criminal justice reform.