Accused woman abuser and sharia law sympathizer Keith Ellison is now trailing in the race for Minnesota Attorney General. Republican Doug Wardlow has now surged ahead by seven points according to the latest poll from leftist propaganda outlets Minnesota Public Radio and the Star Tribune.

In September, Ellison held a 5-point lead over Wardlow. 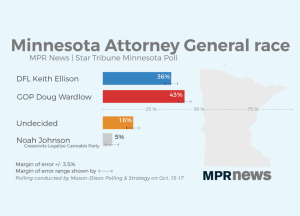 Wardlow remains relatively unknown to voters — 56 percent of those polled said they don’t recognize his name.