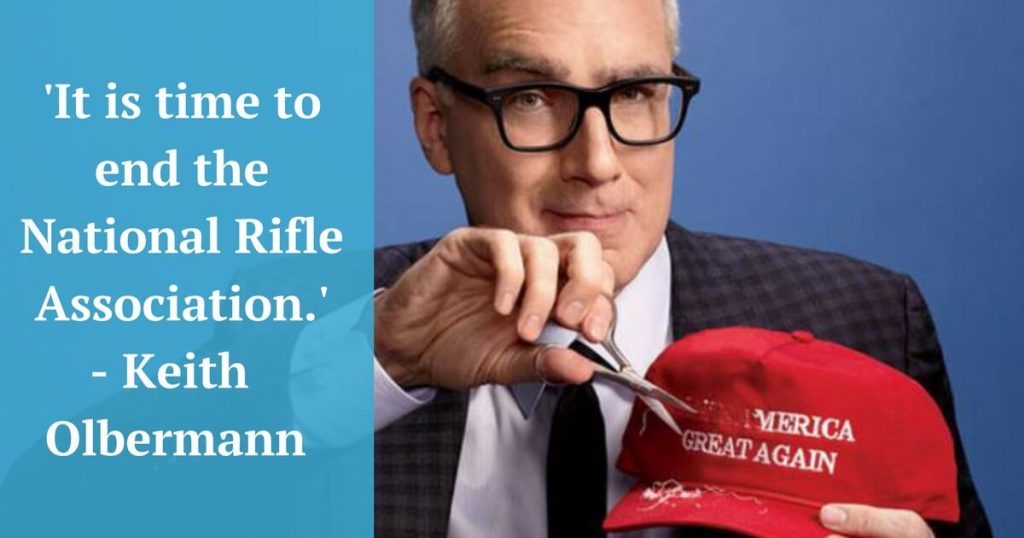 The always vile and irrational Keith Olbermann is now demanding that the National Rifle Association (NRA) be branded a terrorist organization for advocating on behalf of their members’ Second Amendment rights, therefore implying that millions of their registered members are terrorists.

Speaking on his GQ show The Resistance, Olbermann declared that the Second Amendment has been transformed into “an excuse for why madmen of whatever heritage or political purpose cannot be stopped from carrying at least 10 long rifles into a hotel room in Las Vegas, setting up a sniper’s nest, and killing people.”

He then said that the NRA, a “group that enables such massacres” should be “branded for what it is: a terrorist organization.” Olbermann says this while fully supporting federal funds going to Planned Parenthood, an organization directly involved in the killing of innocent people.

Posturing himself as a constitutional expert, Olbermann blasted the Second Amendment itself, repeating the now thoroughly debunked assertion that the Constitution in no way gives citizens a right to gun ownership, only the right for states to operate militias. His source: Richard Nixon’s “conservative” Chief Justice Warren Burger, who said the gun lobby’s interpretation of the Second Amendment is a “fraud on the American people.”

It should be noted here that Justice Burger also sided with the majority in Roe v. Wade granting unfettered abortion rights to women based on a “right to privacy” that exists nowhere in the Constitution; even if it did, declaring that a “right to privacy” means you can therefore have the right to abort your child is one of the broadest leaps in constitutional logic since Dred Scott. The point: Burger is hardly, if at all, a reliable source for constitutional expertise.

“Keep and bear … do not mean ‘own,’ period,” Olbermann said. “The Second Amendment is gun control from an era where the gun was a musket, and not an automatic killing machine that could be bought and stashed on the 32nd floor of a hotel in order to shoot people 500 at a time.”

“It is time to end the career of a politician who made his way to the White House dog-whistling to his ‘Second-Amendment people,’” Olbermann said in reference to what Trump said on the campaign trail.