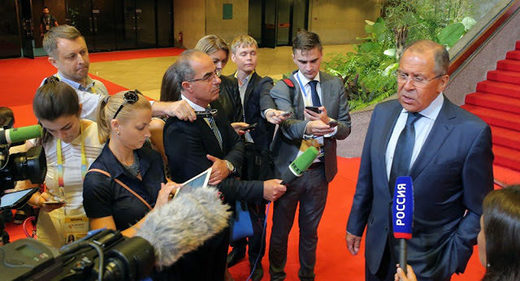 In a glimmer of hope that a military conclusion to the North Korean crisis may yet be averted, Russia’s foreign minister Sergey Lavrov said that “Russia does not accept a North Korea that possesses nuclear weapons”, cautioned that there is an “overwhelming amount of over-the-top belligerent rhetoric on North Korea’s nuclear and rocket programs from Washington and Pyongyang”, but most importantly said that there is a joint Russian-Chinese plan to defuse the North Korean crisis, according to which North Korea would freeze its missile tests, while the US and South Korea would stop large scale exercises.

“Russia together with China developed a plan which proposes ‘double freezing’: Kim Jong-un should freeze nuclear tests and stop launching any types of ballistic missiles, while US and South Korea should freeze large-scale drills which are used as a pretext for the North’s tests.”

It was not clear if Russia or China, had floated this plan with the US or S. Korea prior; the most likely answer is no.

Hoping that “common sense will ultimately prevail”, Lavrov said that North Korea had once signed the Non-Proliferation Treaty (NPT) but then withdrew from it. The result is a nuclear-armed N.Korea which Russia refuses to accept: “Now North Korea claims that it has legal rights to make nuclear weapons and has already done so,” he said. “But you know our position: we don’t accept the fact that North Korea could possess nuclear weapons.”

He added that both Russia and China have a “range of proposals” aimed at preventing what could become “one of the deepest conflicts” and a “crisis with a big number of casualties.”

Still, Lavrov said that Moscow is worried about Washington’s remarks on a preemptive strike on North Korea, and said that Russia is doing its best to prevent this from happening.

“There are direct threats of deploying military power,” he stated adding that “Russia is doing its best to prevent this from happening”

Earlier on Friday, China’s Global Times government-owned tabloid said that “China would not allow” the US to implement a regime change in Pyongyang.

Finally, in terms of next steps, Lavrov said that Washington should take the first step to reconciliation in the escalating crisis:

“The side that is stronger and cleverer” should take the first step to defuse tensions, he said speaking live on state television.

Lavrov echoed German Chancellor Angela Merkel, who earlier on Friday said Berlin would support “any non-military solutions” regarding North Korea but deemed an escalation of rhetoric “the wrong answer.”

“I don’t see a military solution to this conflict,” Merkel told reporters in Berlin. “I see the need for enduring work at the UN Security Council … as well as tight cooperation between the countries involved, especially the US and China.”