Brian Papin, a Special Education teacher at Cedar Grove High School in Atlanta, Georgia encouraged the Black Lives Matter supporter kneeling on a white baby’s neck in a viral photo to “lean into it until death.”

TGP’s Cassandra Fairbanks on Wednesday reported on a photograph of a man kneeling on the neck of a white baby while another person holds the diapered child’s arms is stirring up a massive amount of rage on social media.

In the photo, a man named Isaiah Jackson is seen kneeling on the neck of his girlfriend’s two year old son as another person holds down the diaper-clad baby’s feet. The photo was captioned with “Blm now mf.” 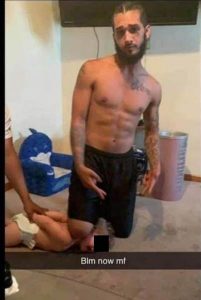