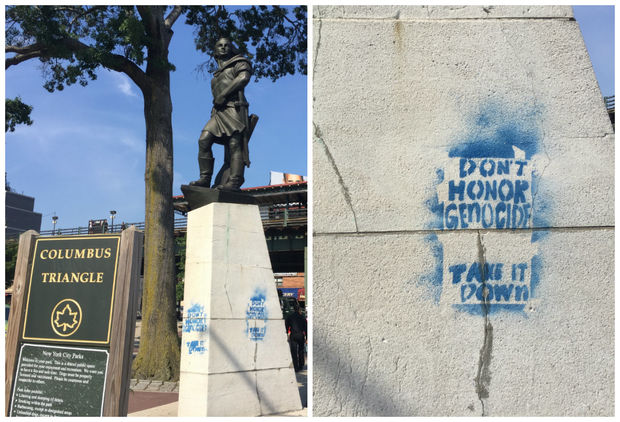 Vandals attacked yet another Christopher Columbus Statue in New York City this week, spray painting “Don’t Honor Genocide” over the memorial as the nation struggles to respond to a natural disaster unfolding on the Gulf coast.

The criminals attacked the memorial in the Queens section of New York City, defacing the famed explorer’s statue with graffiti that read “Don’t Honor Genocide” and “Take It Down.”

“I’m upset, because I live here all my life, and I don’t like seeing the neighborhood being destroyed – our history. What’s next, George Washington and federal hall?” a woman told a local news station.

This is the fifth such incident in recent weeks that vandals and unidentified assailants have attacked Columbus memorials throughout the country; including Baltimore, Houston, New York, and Buffalo.

The attack comes as the debate over historical landmarks and symbols rages throughout the country, with many left-wing activists calling for the removal of Thomas Jefferson and George Washington statues because of their slave-owning histories.

Hyper-liberal NYC Mayor Bill De Blasio recently stated that the city’s iconic statue of Christopher Columbus in Columbus Circle is currently “under review” to determine if the monument commemorates a “symbol of hate.”