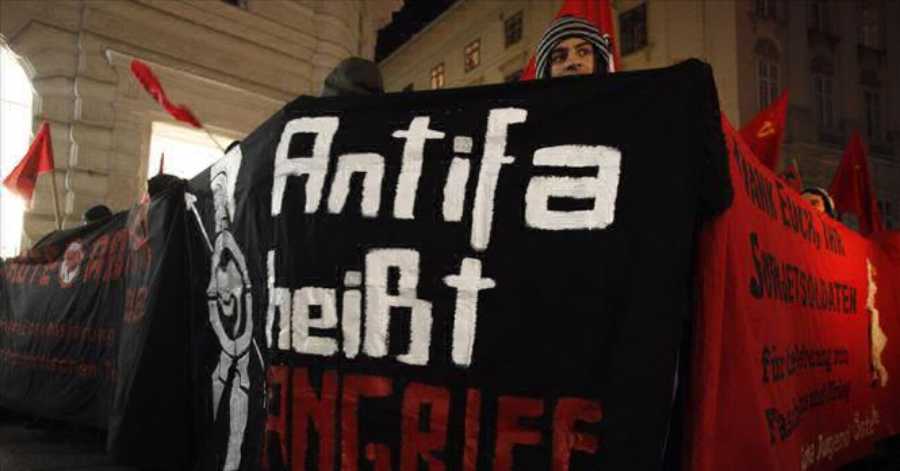 Former Editor in Chief of the New York Times Magazine Edward Klein has a new book that will be released tomorrow October 30th. In All Out War: The Plot to Destroy Trump, Klein reveals an FBI investigation proving coordination between American college campus far left radicals and Islamic terrorists from groups such as ISIS and Al Qaeda.

What started as a secret investigation in to the “resistance” movement spurned by college socialists and anarchists in response to Trump’s political rise, led to the discovery of what the FBI is calling the “the greatest challenge to law enforcement since the Weather Underground and the Black Panther Party.”

“There is clearly overwhelming evidence that there are growing ties between U.S. radicals and the Islamic State, as well as several [ISIS] offshoots and splinter groups,’ stated the FBI field report, which was delivered to Acting Director Andrew McCabe on July 11, 2017, and which is being published for the first time in (his) new book All Out War: The Plot to Destroy Trump.

Last summer the FBI began investigating international radical groups such as ANTIFA and other anarchist groups. However, activity from organizations in Oakland piqued the interest of authorities.

“Now that the bureau has determined they have followers in the radical U.S. resistance movement in the United States, it is clear there will be additional violence in the attacks on law enforcement and U.S. institutions, including banks.

“Ties between three key leaders of the Oakland group [names redacted] met in Hamburg with a leader of the AQAP [Al Qaeda in the Arabian Peninsula] and the AQIM [Al Qaeda in the Islamic Maghreb],’ the report continued. ‘The leader from AQAP is an Egyptian-born male [name redacted] who is known to be in charge of finances and recruiting for the group.

“There is evidence from informants that he is helping the Oakland group acquire the weapons they are seeking, primarily bomb making equipment and toxic chemicals and gasses.

“One of the men from Oakland traveled to Syria to meet with ISIS; the purpose was for training in tactics, but was thought to be primarily a bonding visit to discuss possible massive disruptive attacks in the U.S.

“While in Hamburg, several of the Oakland-based criminals were photographed throwing Molotov cocktails and wielding iron bars, which have been their weapons of choice, though they are almost certainly on the verge of upping the caliber of their weaponry for use in the U.S.

“Despite having their faces covered by masks, they were positively identified.

“This group and their connections with the radical Islamic groups must be disrupted and destroyed.”

Klein also claims that under Barack Obama’s watch, anti-American groups were able to coordinate and foment insurrection because these groups were largely ignored by the FBI during his administration.

“The FBI is really playing catchup ball, because the Obama administration refused to give the bureau the resources it needed to effectively infiltrate and surveil the radical groups on college campuses,’ the source continued.

“Any talk of a connection between radical Islam—a phrase the Obama people wouldn’t even use—and American extremists was pretty much laughed off. [Former Attorney General] Loretta Lynch would have blown a gasket if she heard that the FBI was surveilling so-called college political organizations.

“All that has changed under the Trump administration. Everyone’s aware that the resistance movement, with its effort to get rid of Trump by any means necessary, has created fertile soil for ISIS and al Qaeda to establish a beachhead in America.”

In other words, the far left and radical Islam are united in their hate for the American way of life. They are willing to work together and to be violent to accomplish their goals.

This is nothing new. As mentioned in the FBI report, since the 1960s, radical liberal, anarchist, and socialist groups have regularly used violence as a means to their collective end; the destruction of the United States and implementation of communism or socialism.

The aforementioned group “Weather Underground” is probably the most well known left-wing domestic terrorism organization in the history of the United States. That group was founded by Bill Ayers. Ayers, alongside his girlfriend and several other colleagues, utilized homemade bombs to target American institutions of law enforcement. They successfully detonated several bombs at places such as the Pentagon, the U.S. Capitol, and a wide range of police stations. His group never killed anybody, but not for lack of trying. They wanted to place explosives at a Fort Dix Army dance, but were stopped by the feds. But, due to a legal misstep by the FBI, Ayers was never charged with domestic terrorism. In fact, Ayers is an unrepentant anti-American, Anti-capitalist. In 2000, he told the New York Times that he did not regret the violent actions his group took. “I don’t regret setting bombs…I don’t feel we did enough.”

If you are wondering what happened to his girlfriend that he co-founded Weather Underground with, well, she died during a bomb cooking experiment gone wrong. Ayers later married Bernadhine Dorn, who was also a member of the domestic terror group. Bill Ayers is also infamous for acting as quasi-mentor to President Barack Obama. Obama launched his political career from Ayers house in 1995.

In 2013, I had an opportunity to protest and speak with Bill Ayers after my college invited him to speak in an academic setting. Ayers now works as an educational reformer and  is a professor of education theory at the University of Illinois in Chicago. He was at my school to speak to our education department and education majors. Myself and several other Conservatives were rightfully outraged that our college had invited him in the first place. But rather than shout him down as current college students do to voices they disagree with, we printed flyers and passed out pamphlets informing students he was. We also gained a few hundred signatures to show our dissatisfaction. It was rather successful. I was somehow blessed with a largely conservative student body where I attended. But, this led to an opportunity to speak with the man.

I asked him if he had any remorse for his actions. Ayers did not. He even seemed adamant that he was morally correct to place the explosives. “The United States was illegally killings thousands of Vietnamese each week, what would you do in that situation,” I remember him telling me.

Ayers also told me that his goal was, and still is, the destruction of capitalism and the United States. But, as an activist, he realized he could be more effective in the educational realm. At the end our conversation, Ayers asked if there was a place to get coffee nearby. “Boy, I hate capitalism but love Starbucks,” he remarked.

This anecdote is important, because as Klein’s book shows, modern college left wing radicals are following in Ayers’ footsteps and are undoubtedly inspired by him. They are just as violent, just as committed, and unless are stopped by the FBI, will continue to try and fundamentally change the USA by whatever means necessary.