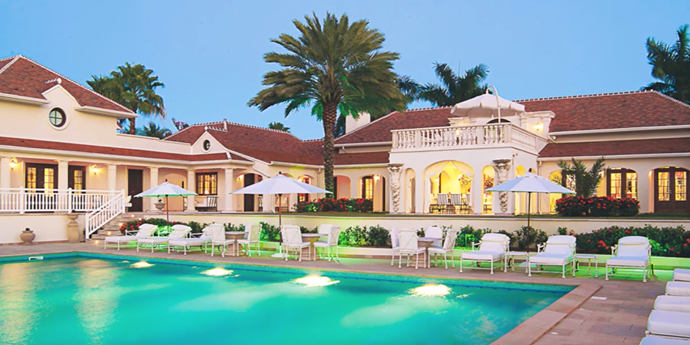 Hurricane Irma is massive, killing dozens and destroying homes as it barreled through the Caribbean on its way to Florida.

And that’s just how one leftist website would have it. In fact, DeathandTaxes.com, which says it’s “for lovers of news, culture, and politics” and “produces some of the best-loved social content on the web,” hopes the deadly hurricane does more destruction.

“If it’s any consolation, Hurricane Irma might fuck up Trump’s Caribbean mansion,” the website wrote on Tuesday, before the storm ripped through St. Martin.

The only silver lining is that while Irma ravages the Caribbean, one building at risk is the president’s $16.9 million, 11-bedroom compound on Plum Bay in the French territory St. Martin.

According to the Washington Post, the estate is named Le Château des Palmiers (“Castle of the Palms”) and sports two villas, a tennis court, marble floors, gold curtains, gold-hued wallpaper, and a two-story master suite. Despite ethics concerns, Trump’s been trying to sell the thing for months and recently cut the price by 40 percent because nobody is biting. It’s located directly in Irma’s path and will likely get destroyed.

Just something funny to remember when Mar-a-Lago refuses to provide shelter for displaced Floridians on Friday.

Yesterday, the Post confirmed the estate had suffered damage, saying “one of the causalities has been President Donald Trump’s vacation home, Le Chateau des Palmiers on the island of St. Martin.”

While the extent of the damage is not known, officials that control the side of the island where Trump’s beachfront property is located, told the Washington Post that the territory suffered widespread destruction.

“We know that the four most solid buildings on the island have been destroyed, which means that more rustic structures have probably been completely or partially destroyed,” French Interior Minister Gerard Collomba told AFP.

The Post also ran its own destruction watch on Trump properties.

After barreling across the Caribbean, Hurricane Irma is headed for South Florida, potentially threatening Trump’s signature Mar-A-Lago club and three golf courses he owns in Doral, West Palm Beach and Jupiter. Forecasters said it is too soon to know whether they will be in the direct path of the hurricane, but all are likely to face tropical storm conditions, at minimum.

“The safety and security of our guests, members and colleagues is our top priority and we are closely monitoring Hurricane Irma,” Miller said. “Our teams at the Trump properties in Florida are taking all of the proper precautions and following local and Florida state advisories very closely to ensure that everyone is kept safe and secure. We continue to send our thoughts and prayers to victims of Hurricane Harvey and are praying for those that are in the path of Hurricane Irma.”