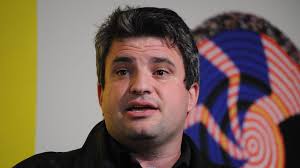 One has to pity the poor families that will be breaking bread with identity politics cranks, social justice warrior nitwits and aspiring communists today as the nation celebrates Thanksgiving.

It used to be that the holiday was a time of togetherness and no matter how intolerable that some family members may be – like my dear departed Uncle Sam – it was only for one day and regardless of politics, people generally behaved themselves with the interests of keeping peace and enjoying that nice homecooked feast being the overriding concern.

It used to be that football was a sanctuary as well with the NFL serving up the traditional helping of Detroit turkey along with the Dallas Cowboys and the recently added night game. Now thanks to the hijacking of the league by racial grievance mongers and Kaepernick crusaders, not even that is sacred.

Especially not in 2017 when the league had the AUDACITY to schedule a night game between the Washington Redskins and the New York Giants. While both teams suck out loud and many will be tuning it out anyway, the presence of the team from the nation’s capital is being decried as racist and as the promotion of genocide.

That is what leftist sportswriter Dave Zirin believes, a staunch defender of Kaepernick and the kneelers, Mr. Zirin was triggered by the Redskins.

My latest piece @thenation "By Having the R*dskins Host a Game on Thanksgiving, NFL Owners Show Their True Colors" https://t.co/OXqZZp0XwD

"Like a private, sick joke among owners, Washington will host Thanksgiving game for first time in league history" https://t.co/OXqZZp0XwD

In a year where talking racism has taken center stage in NFL, this is irony that rises to the level of obscenity https://t.co/OXqZZp0XwD

This Thanksgiving we will all witness the truth: a league that celebrates racial slurs can never be an engine for racial justice. https://t.co/OXqZZp0XwD

Via the leftist rag The Nation “By Having the Washington R*dskins Host a Game on Thanksgiving, NFL Owners Show Their True Colors”:

This NFL season has blazed new political trails as players have used their platform to stand up to racism in the face of a ferocious backlash. It has truly been a season of firsts. But there is another “first” on the immediate horizon that speaks to the league’s baldly reactionary history in regards to race.

The NFL—for all their corporate rhetoric about being something that “brings the country together”—of course has a team named after a Native American racial slur in the nation’s capital. That’s not news. What is news is that on Thanksgiving, for the first time in league history, this team in Washington will be playing host. That means as we finish our food, slip into sweatpants, and to gather around the television to watch NFL football, a tradition only slightly less ubiquitous than pumpkin pie, the R*dskins slur— a name that exists only because of genocide and displacement—will have center stage.

The ridiculous Redskins issue should have been settled once and for all over the summer after the Supreme Court ruled in favor of Asian rock band “The Slants” and their “offensive” nickname being free speech and not subject to the threats of big government trademark revocation.
But it’s never over for these idiots. I have actually read a good number of Zirin’s early books which while written with a leftist slant, were well thought out and well-researched commentary on the social aspects of the games and the issues that many athletes of color faced during the civil rights era.

Now he like the rest of the left has gone batshit crazy after President Donald Trump was elected. TDS strikes again!