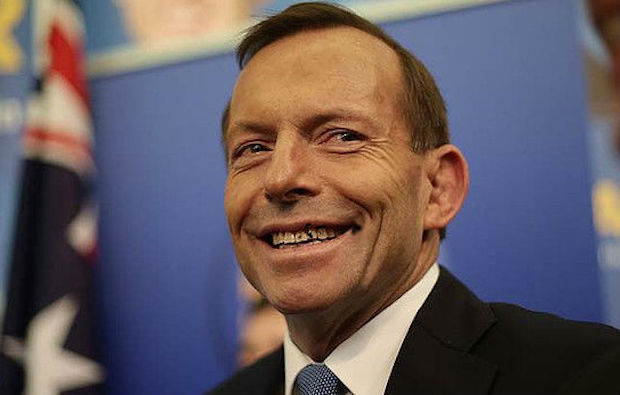 Tony Abbott has been physically assaulted by a campaigner for same-sex marriage, in an attack Australia’s former prime minister said characterised the “ugliness and intolerance” present on the LGBT side of the debate.

A prominent supporter of the campaign for traditional marriage during a  poll on whether the country should redefine the institution, Mr. Abbott was attacked as he left a newspaper office in Hobart, the Tasmanian capital.

He told Macquarie Radio he was left with a swollen lip after a man wearing a “vote yes” badge asked to shake his hand before assaulting him.

A 38-year-old male has been charged with assault following the incident.

Mr. Abbott said he was walking towards his hotel in the Docks area of Hobart, where he was due to attend a Young Liberals cocktail party, when he heard a man shout: “Hey, Tony!”

“I turned around, there was a chap wearing a Vote Yes badge, he says ‘I wanna shake your hand’.

“I went over to shake his hand and he headbutted me. He wasn’t very good at it, but he did make contact, but the only damage was a very slightly swollen lip”, to former Prime Minister said.

Freedom of speech. One rule for some… https://t.co/m43Z61BwbM

“The love is love brigade aren’t showing a lot of love,” the conservative figure quipped, describing the attack as “a reminder of how ugly this debate is getting”.

“And the ugliness is not coming from the defenders of marriage as it’s always been understood — the ugliness, the intolerance and indeed in this instance, the hint of violence, is coming from those who tell us in the name of decency and fair-mindedness and freedom, we’ve got to allow same-sex marriage,” he said.

“I think it was pretty clear that this is was, to use the phrase, ‘politically motivated violence’,” Mr. Abbott told presenters Steve Price and Andrew Bolt.

Yet after the Prime Minister’s comments the man who claims to have been the assailant came forward to Australian press and said despite his wearing pro-gay marriage badges at the time of the attack, the assault had nothing to do with the issue. Instead it was motivated by pure personal hatred for Mr Abbott himself, reports News.com.au.

Identifying himself as Astro Labe, the man said he’d tell the court that “It’s just about Tony Abbott — the f***ing worm that he is.

“All it was is I saw Tony Abbott and I’d had half a skinful and I wanted to nut the c***.

“I want to divorce myself [from the same-sex marriage issue] — not because I disagree with their stance — but this was nothing to do with that. That’s just my personal hatred.”

Recent weeks have seen abuse towards people who believe marriage is between a man and a woman intensify, with police having to evacuate a post office in Canberra after the discovery of “suspicious” packages addressed to the Australian Christian Lobby (ACL).