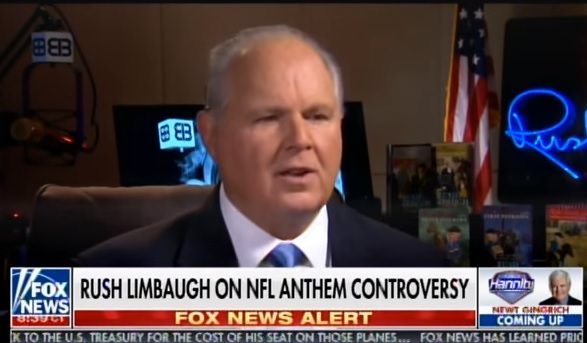 In a sit-down interview with Fox News’ Sean Hannity Thursday evening, Rush Limbaugh weighed in on everything from the NFL kneeling controversy to why President Trump is having such a hard time with his own party.

Limbaugh argued that the Washington Establishment is determined to prevent Trump from fixing what’s been broken about government for decades.

“I’m not exaggerating here. … They don’t want [and] they can’t afford for him to succeed with his agenda. They can’t afford it,” the conservative radio host said.”The joke is revealed if an outsider with no prior political experience can come in and fix messes that people have been promised would be fixed for 30 years. How does that make them look? They can’t allow that to happen.”

As for the NFL, Limbaugh said that the left is attacking the sport because football represents things they hate, such as masculinity and patriotism.

“I do believe that the left wants to cause great damage to the NFL,” he told Hannity. “What does the NFL stand for? Masculinity. Strength. Toughness.”

He went on to say that on college campuses across the country there are actually classes about how to remove masculinity from men.

He continued listing the reasons the left hates the sport:

“It’s patriotic,” he explained, “you’ve got the flag, you’ve got the anthem, you got military uniformed personnel. All the things that the left wants to erase from this country. They don’t like displays of patriotism, strength, rugged individualism. And that’s why the players are being used here.”