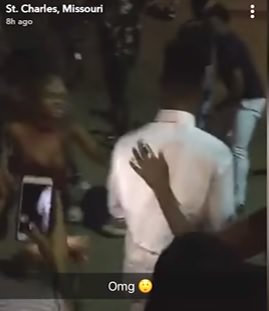 There was a massive street brawl on late Saturday night in downtown St. Charles.

The brawl started somewhere near 142 North Main Street in the business district.

The brawlers were dressed in tuxedos and long dresses so it was either a high school or college event or a wedding.

One poor girl was knocked out cold on the street.
The rest of the kids laughed out loud.
Sick stuff.

A large fight broke out downtown St.Charles on N Main Street at what appears to be a wedding gone wrong. Someone is knocked unconscious, followed by a massive group brawl and a possible arrest. (Video captured from a Snapchat public posting) The group of black men were allegedly beating up on a female, according to sources.

It is not yet clear what caused the massive brawl.