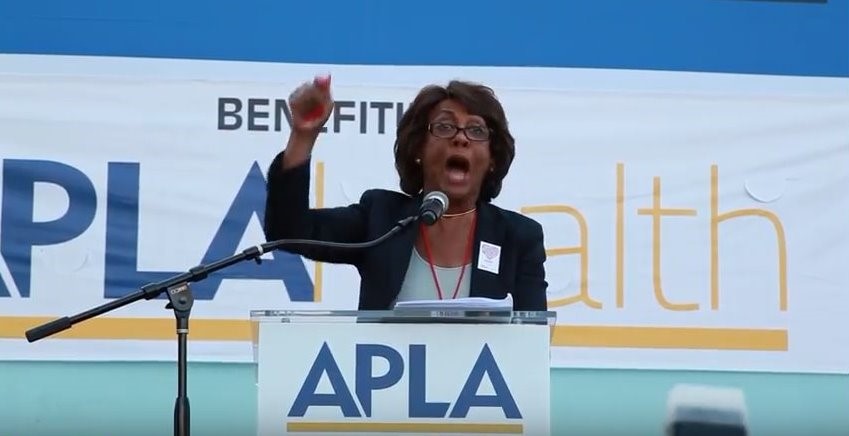 It took less than three minutes for Mad Maxine to shift the focus during a recent speech at the 2017 AIDS Walk Los Angeles from the progress made to combat the sexually transmitted disease to her never-ending campaign to impeach President Trump.

Waters took the stage in front of Los Angeles City Hall on Sunday for the opening ceremony of 2017 AIDS Walk, and quickly turned the event into a platform to push her political agenda. The speech follows similarly inappropriate comments about Waters’ campaign to impeach Trump she delivered during a eulogy for comedian Dick Gregory last month.

In L.A., Waters congratulated APLA Health for meeting online fundraising goals and briefly outlined the progress made to control the AIDS epidemic, then quickly pivoted to Trump and Republicans in Congress.

“We face unprecedented challenges today in our struggle against HIV and AIDS and I want you to know those people in Congress on the opposite side of the aisle from me control every branch of our federal government,” Waters said. “And we have, unfortunately, an unstable, erratic person in the White House.

Waters then announced “this is not a political event” before delving back into partisan politics.

“We don’t know what this president will do, or say, or tweet from one day to the next. Don’t forget, this is not a political event, but I’m heading toward impeachment,” Waters said with a chuckle.

“Another challenge we face today is Republicans’ determination to repeal the Affordable Care Act, commonly known as Obamacare,” Waters continued. “Without Obamacare, insurance companies will once again be able to deny care to the people living with HIV and other pre-existing conditions. Furthermore, without Obamacare states like California that expanded Medicaid will not be able to cover low-income adults living with HIV.

“And so, the House Republicans’ Obamacare repeal bill which passed the House in May will cut $100 billion from Medicaid and cause 23 million Americans to lose their health insurance,” the 79-year-old career politician said. “So far, the Senate has been great. It has refused to pass the bill.”

“And so, ladies and gentleman., this president revealed his true intentions in a tweet on Friday morning when he boasted that Obamacare is imploding, he said, and said Democrats should call him to fix the mess he has now created,” Waters said. “I am not gonna to call him, I’m calling him out.

“In other words, Trump’s goal is to sabotage our nation’s health care system just because a major health care reform law has President Obama’s name on it. He obviously does not care how many people will suffer and die as a result of this vindictive, spiteful and cruel attempt to dismantle American health care,” she continued.

Waters contends the solution demands a fight to preserve Obamacare, opposition to budget cuts, and the preservation of “all of the federal programs serving people with this disease.” Waters said she also plans to fight for expanding programs and providing money and treatment for AIDS to folks in Puerto Rico and the U.S. Virgin Islands.

Waters’ focus on attacking Trump during the fundraiser was predictable.

In September, the California congresswoman turned the eulogy of comedian Dick Gregory into a tirade against Trump, whom she repeatedly referred to as a “dishonorable human being,” The American Mirror reports.

Instead of remembering her “friend,” Waters declared she’s “going to sanitize the White House,” and rid the country of “this dishonorable human being who has the alt-right, and the KKK and everybody else inside his Cabinet!”

“When I get through with Donald Trump, he’s going to wish he had been impeached!” Waters yelled, pointing at the crowd.

“I feel it very deeply — I am so offended by him and I love my people so much I’m not gonna put up with it.