Behold the power of editing.

Consider this tweet from ABC 7 on the alleged killer, Nasim Aghdam, whom police say shot up YouTube’s headquarters on Tuesday:

While light-skinned, Nasim Aghdam has jet-black hair and brown eyes. 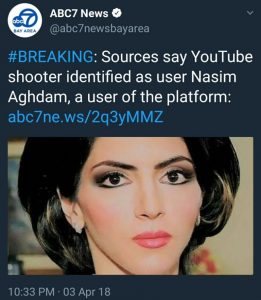 But the very same photo tweeted by Mashable shows Aghdam with lighter skin and green eyes:

Mashable apparently altered the photo, which appears to have been deleted. 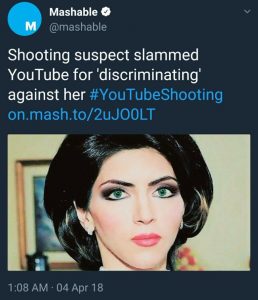 The original narrative put forth by the media was that Aghdam had targeted a boyfriend.

But that changed later in the day.

The woman who allegedly shot three people at YouTube’s headquarters in California on Tuesday, before apparently taking her own life, held a grudge against the video-sharing company, according to her family and her own social media posts.  […]