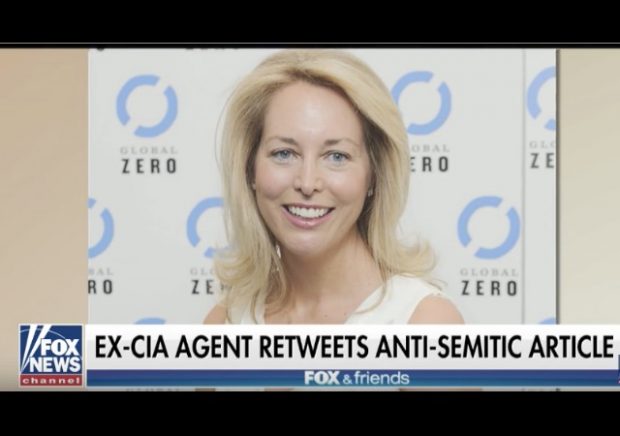 Imagine, if you will, a conservative tweeting that Jews in America are causing the country’s wars. That person would rightly be denounced by his fellow conservatives and pilloried in the media. But if you’re a progressive media darling, you get a hand-waving pass. This brings us to the way the media covered former CIA analyst Valerie Plame and her long history of anti-Semitic tweets.

When you’re Valerie Plame, and you’ve been a “victim” of the “vast right-wing conspiracy” complex, your allies in the media run cover for you. Especially when, like Plame, you are on the board of Ploughshares, an anti-nuclear proliferation “non-profit” former Obama aide and media darling Ben Rhodes says was instrumental in selling the Iran deal to the American public.

On Thursday morning, Plame tweeted a link to a piece entitled: “America’s Jews Are Driving America’s Wars.” The reaction was fierce and swift. Many conservative media outlets quickly exposed Plame’s long history of anti-Israel and anti-Semitic social media posts. With the exception of CNN’s Jake Tapper — who was celebrating Rosh Hashanah and not working — the mainstream media seemed more interested in Plame’s “apology” than delving into her history of overt anti-Semitism.

The media’s coverage of this story was an epic journo-fail.

After receiving significant blowback for her tweet, Plame tried to backtrack. Here is a representative sample of those tweets.

2) Just FYI, I am of Jewish decent. I am not in favor of war with Iran, or getting out of the Iran nuclear treaty. There are simply https://t.co/AR3Jsl1yml— Valerie Plame Wilson (@ValeriePlame) September 21, 2017

Got it, neocons are Jews, and you have a Jewish ancestor, so you can’t be an anti-Semite. Plame also has apologized profusely on her Twitter account. Because she did so, her friends in the media have been running cover for her.

Take, for example, Sophie Tatum at CNN. Tatum’s nearly 300 words on the subject contained seven tweet embeds from Plame. The article was framed as Plame’s apology. Despite her colleague Jake Tapper exposing previous anti-Semitic tweets by Plame, Tatum’s article had no mention of Plame’s history. Just her apology and a denunciation of the site Plame linked to by the pro-Iran deal non-profit Plame is on the board of.

While Tapper was out, the fill-in host of his daily show, The Lead, briefly mentioned what Plame tweeted and made a vague reference to “past tweets,” without expanding. His guest, a former Hillary Clinton campaign operative, merely stated that a lesson could be learned to read past the first few paragraphs before sharing a story.

The title of the article was “America’s Jews are Driving America’s Wars.” The title itself is anti-Semitic, no further reading was necessary to find that out. And Plame’s explanation mentions that neocons, who by and large have an interventionist foreign policy, “ARE Jewish.” Her apology repeats the anti-Semitic line and tells people to “calm down.”

It wasn’t just CNN that didn’t delve into Plame’s past social media posts. Fox News also focused on yesterday’s tweet, with no explanation of her past. That on-site article was from Thursday. On Friday morning, “Fox & Friends” had Harvard Law Professor Alan Dershowitz, who said her tweet was “much, much worse” than was being portrayed by news outlets.

Ace of Spades, a conservative blogger, highlighted some of the most egregious of Plame’s previous tweets.

Welp. I guess we should’ve seen this coming back in April. pic.twitter.com/B24xxP17zU

Anti-Semitic social media posts are not a onetime thing for Plame. She has a long history of it, as the posts above show.

You’ll remember, after the inauguration of President Donald Trump, there was a concerted effort by the media to label Trump an anti-Semite because he did not denounce every single instance of anti-Semitic graffiti or “attacks” happening in America every minute of the day. Here’s a few of those stories from McClatchy, the Washington Post, and MSNBC.

Just this week, the Washington Post published an op-ed with the thesis, “Trump’s unquestioning support means trouble for Israel.” You see, when it comes to Jewish issues and Israel, the MSM will attack Republicans for both not doing enough and doing too much.

So why, then, the reluctance to go after Plame? Could it be that Plame has started a crowdfunding campaign to buy Twitter for the express purpose of booting Trump from the platform?

After all, as the saying goes: “The enemy of my enemy is my friend.”