A newly released medical record adds further support to the claims of Congressman Keith Ellison’s accusers, who have stated that he was physically and emotionally abusive during their relationships with him.

On Wednesday, Karen Monahan, who dated Ellison and accused him of domestic violence, released one of her medical records from 2017  that documents her stress and anxiety level as being directly related to her abusive relationship with Rep. Ellison. 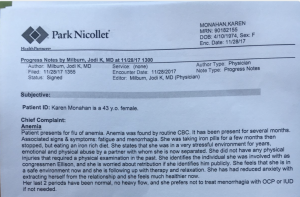 “She (Monahan) states that she was in a very stressful environment for years, emotional and physical abuse by a partner with whom she is now separated. She did not have any physical injuries that required physical examination in the past. She identifies the individual she was involved with as Congressman Keith Ellison, and she is worried about retribution if she identified him publicly. She feels that she is in a safe environment now and she is following up with therapy and relaxation. She has had reduced anxiety with extracting herself from the relationship and she feels much healthier now.”