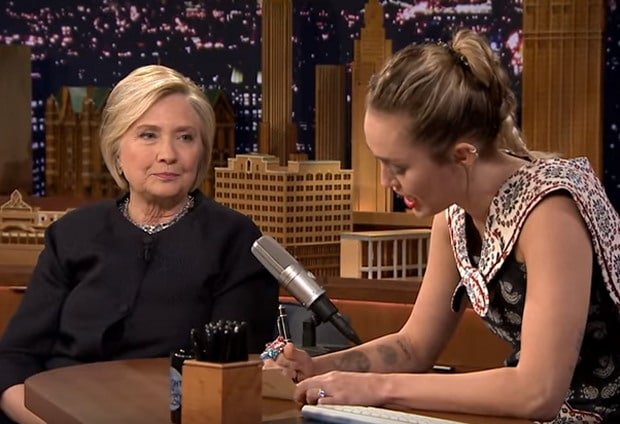 Cyrus wept as she thanked Clinton for being “a role model and an inspiration.”

In perhaps the funniest bit to hit late night in months, singer Miley Cyrus wept as she read aloud a “thank you” note she wrote for two-time failed presidential candidate Hillary Clinton.

The singer, along with female writers for The Tonight Show,Starring Jimmy Fallon, sat in the host’s chair and read their “thank you” notes to Hillary, who was sitting down as a guest.

“Thank you Hillary for being a constant beacon of strength, hope and determination for me and millions of other young women,” said an emotional Cyrus. “You’ve been a role model and an inspiration and a voice of reason in uncertain times. I could go on and on, but I’d like to get right to the point: Can I give you a hug?”

Hillary hit the “EMOTE” button on her internal switchboard and gave Cyrus a hug.

The pop singer with an affinity for being naked and smoking weed, campaigned her twerking bottom off for Hillary during the 2016 presidential election. Oddly enough, Cyrus’ sway did not push Hillary over the top to defeat Donald Trump.

The performer was such a diehard anti-Trumper, in fact, she vowed to leave the United States if Trump won the election.

Fallon, as you might recall, had Trump on his show months ago for a lighthearted interview. The host even playfully tousled Trump’s hair, to the Left’s horror. Like a good leftist, Fallon eventually apologized for treating Trump like a human.

Seemingly still paying penance, Fallon’s female writers were trotted out on stage, too, all reading Hillary their “thank you” notes.

“Thank you, Hillary Clinton, for handling this difficult transition with more grace than I ever could have imagined,” said one writer. “That being said, call me day or night and I will be there with a gallon of ice cream and two spoons to tell you, ‘Girl, you are so much better than him!’

“You may get the call,” replied the former Secretary of State.

Closing the show, Hillary thanked all the writers and pop-singing Cyrus.

“Thank you Miley, the Tonight Show writers and all of the women and young girls out there,” she said. “You are smart, strong and deserving of every opportunity. Together we’ve made our voices heard, we’ve done great things and we’ve come a long way. But as Miley would say, we can’t stop, and we won’t stop,” hip Hill joked.