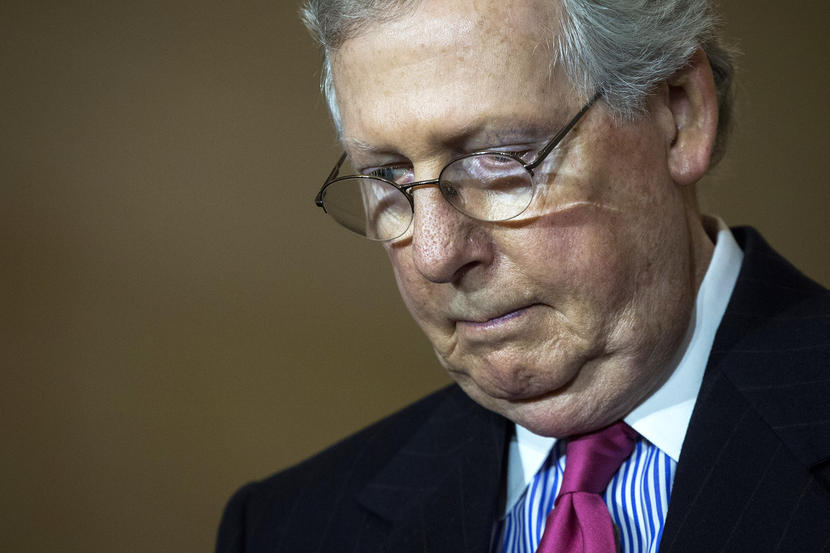 Senate Majority Leader Mitch McConnell is having a bad summer. A very bad summer to be exact. The Kentucky Senator is finally in the rare position of leading the GOP with control of the House, Senate and White House — yet, McConnell is struggling to forward President Trump’s ‘America First’ agenda. To make matters worse, poll numbers in McConell’s home state are tanking amid President Trump questioning the lawmaker’s future as Senate Leader of the Republican Party.

“The approval rating of Senate Majority Leader Mitch McConnell (R-KY) has plummeted to just 18 percent, a survey from Public Policy Polling has found.

The poll, which surveyed 645 Kentucky voters, found that just 18 percent of respondents approved of McConnell’s current performance, compared to 74 percent who disapproved. Seven percent of people said they were not sure.

McConnell, who is the longest-serving U.S. Senator in Kentucky history, having represented the state since 1984, was recently criticized by President Trump for failing to pass the healthcare reform bill through the Senate.

“Can you believe that Mitch McConnell who has screamed Repeal & Replace for 7 years, couldn’t get it done,” Trump wrote on Twitter earlier this month. “Mitch, get back to work and put Repeal & Replace, Tax Reform & Cuts and a great Infrastructure Bill on my desk for signing.”

“Trump has consistently hammered media organizations for their critical coverage of both his candidacy and his presidency, accusing them of putting out “fake news” — an accusation that has become a rallying cry for his supporters. His latest salvo came Monday morning when he retweeted a message about “fake news” attacks against him, writing, “Thank you, the very dishonest Fake News Media is out of control!”

But when asked on Monday about where he gets his news, McConnell — who has been the target of Trump’s ire in recent weeks — said he has no trouble finding reliable sources.

“What I do every morning — there a couple of services I look at that gives me a synopsis of articles,” McConnell said. “It is my view that most news is not fake. But I do try to look at a variety of sources.”

“Speaking at a Rotary Club gathering in Kentucky on Monday, Senate Majority Leader Mitch McConnell vented about how President Donald Trump’s lack of political experience has led to him setting “excessive expectations” for legislative priorities.

McConnell, R-Ky., told the group in Florence that he found it “extremely irritating” that Congress has earned the reputation of not accomplishing anything.

“Part of the reason I think that the storyline is that we haven’t done much is because, in part, the president and others have set these early timelines about things need to be done by a certain point,” said McConnell, a Republican and the state’s senior senator.

Trump, a political newcomer, as McConnell noted, has a habit of declaring progress on major priorities that do not necessarily reflect the reality of lawmaking.

For example, as the House was in the midst of negotiations about its Obamacare replacement bill in February, Trump announced that Congress was in the “final stages” of its bill and said it would be ready for “submitting” in March. While the House bill was unveiled in March, that chamber didn’t vote on it until May, and health care votes continued until the end of July.

That sort of disconnect has led to Trump’s expressing disappointment when bills — chief among them health care reform — fail to end up on his desk, even though, as with health care, the political reality indicated all along how difficult it was going to be to pass legislation.

“Our new president, of course, has not been in this line of work before. And I think he had excessive expectations about how quickly things happen in the democratic process,” McConnell told the group. “So part of the reason I think people feel we’re underperforming is because too many artificial deadlines — unrelated to the reality of the complexity of legislating — may not have been fully understood.”

President Trump is taking a hard stance against Republican Senate Majority Leader Mitch McConnell after the Kentucky lawmaker complained about the administration’s “excessive expectations.” Speaking about McConnell to reporters, President Trump said ‘you can ask the question’ whether Senate Leader McConnell should step aside if he can’t deliver on agenda.