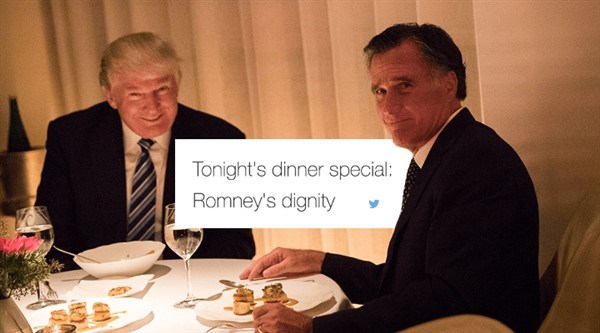 If reports are accurate then the biggest Never Trumper of them all may soon be headed to the United States Senate where he could lead the fight against President Trump.

Mitt Romney is meeting with donors as well as prominent neocon William Kristol to get his ducks in a row for a 2018 run that would immediately catapult him to the front of the line of Trump critics in Congress.

The red carpet would be rolled out for Mitt just in time for the results of crooked Bob Mueller’s witch hunt, perhaps Romney could cast the deciding vote if the Senate has a chance to stage the show trial against Trump that they have been salivating over ever since the dirty dossier dropped.

Mitt Romney is edging closer to a 2018 Senate run.

The former Massachusetts governor would run in Utah as an elder statesman willing to challenge Donald Trump, associates say.

The former GOP presidential nominee is huddling with Utah’s class of GOP power brokers, contacting the state’s major political donors, and hitting the trail for candidates running in local races amid mounting speculation that the state’s longtime senator, Orrin Hatch, will retire. Romney is also raising money for House and Senate Republicans, winning him favor with GOP leaders ahead of a treacherous midterm election.

Last week, Romney attended a high-profile gala in Salt Lake City hosted by the Sutherland Institute, a prominent conservative think tank. The event drew a number of notable Utah political figures, including Sen. Mike Lee and Utah Senate President Wayne Niederhauser. Romney shared a table with former Gov. Mike Leavitt, a longtime supporter he’s been in touch with amid his deliberations. He also had a private conversation with the night’s featured speaker, conservative commentator Bill Kristol.

Kristol declined to say what the two discussed. But, he said, “Assuming Sen. Hatch retires, I hope Mitt runs. He’d be a very good senator.”

The Senate might seem like an unexpected landing place for the 70-year-old former Massachusetts governor and two-time presidential candidate. Yet those who’ve spoken with Romney in recent days are convinced he’s prepared to jump in. After falling short in his quest for the White House and then being passed over by President Donald Trump for secretary of state, friends say Romney still has unquenched political ambitions.

Romney was a fierce critic during the entire process of the GOP primaries, getting shriller by the day as Trump dispatched his establishment opponents with the prowess of a skilled political assassin. He never had the balls to actually join the race himself so instead, Romney became a figurehead of the Never Trump movement.

Mitt also worked together with Kristol to field a candidate to oppose Trump in the general election even if it basically amounted to a stealth campaign for Hillary.

When all was said and done, the best that they were able to come up was a creepy ex-spook named Evan McMullin who they were hoping would be able to siphon enough votes in Mormon-heavy Utah and other western states.  It didn’t work and as they say, the rest is history.

Romney has a serious score to settle with Trump after the incoming POTUS humiliated him by making him grovel for the Secretary of State job and then pulled the rug out from under him.

Now Mitt will his chance, if he does indeed go through with the Senate bid he would immediately be aligned with the likes of John McCain, Jeff Flake, and Lindsay Graham and would work hand in hand with the Democrats against Trump’s agenda which the establishment is desperate to stop.