The gun rights advocacy group announced the endorsement in a press release Friday. 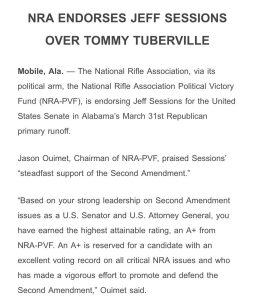 Jeff Sessions has a concrete and spotless record as a defender of the Second Amendment, as evidenced by his A+ career score from the NRA as a Senator and Attorney General.

Another letter from the NRA addressed to the Sessions campaign breaks down his accomplishments in protecting gun rights. The gun rights group cites Sessions’ shutdown of Operation Choke Point as Attorney General, an Obama administration program that sought to bully banks and financial institutions to shut off lawful gun stores and retailers from using their services.