Nike’ newest spokesman and the face of the “Just Do It” marketing campaign has been known to hang in the company of one of America’s most outspoken radical Islamists.

Former NFL quarterback Colin Kaepernick has support from Linda Sarsour, a Sharia-Law supporting radical Islamist who poses as a leftist, when in reality her religion is the least progressive in the world.

Sarsour joined the NAACP outside of the NFL headquarters in News York in August, 2017 to demand that Kaepernick be given job in the League. She sported a Kaepernick jersey at the event: 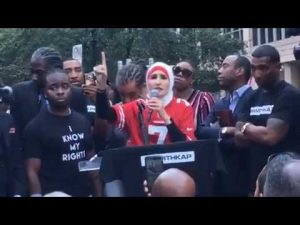 The pair was also photographed together at the 2017 Time 100 Gala.