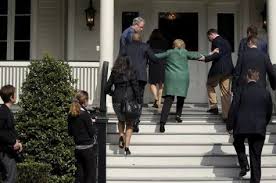 Yesterday the doctor who performed an exam of President Trump in regards to his physical and mental health and therefore ability to function as President stated that the President has “incredibly good genes.”

The media went mad with the results showing that they could not pass the same tests.  But this is nothing new.

The Democrats and their unstable MSM have a history of being mentally and physically sick!

Hillary Clinton is a prime example.  President Trump knew this as a candidate.

Hillary was so sick she stopped having campaign events as she was running for President.  She took weekends off because she just didn’t have the stamina to campaign.  Hillary participated in only 11 campaign rallies in both […]