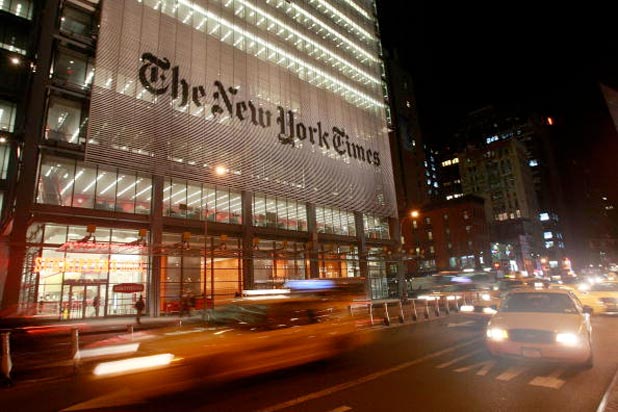 Venezuela’s economy is a basket case, with dramatic shortages that led to protests and violence. The United Nations reported “mounting levels of repression of political dissent by national security forces” and increasing persecution of the socialist government’s opponents. Trump didn’t “manufacture” that. The Times is publishing fake news as an ad. Kew wrote:

The ad — titled an “Open Letter from the People of Venezuela to the People and Government of the USA” — is primarily a response to Trump’s recent threat of military intervention as well as sanctions imposed on leader Nicolas Maduro and the government as a whole.

The letter claims that the United States might “be on the verge of an unfair and baseless military intervention,” while Trump’s sanctions will affect their “economy and means to obtain resources for food, healthcare, and production.”

The ad concludes in classic leftist fashion: “It is a time for dialogue and understanding. Let us not miss the opportunity and in the words of John Lennon: Let’s give peace a chance.”

This isn’t the first time the liberal paper allowed this kind of ad. In February, the Times published a full-page open letter by Venezuela’s vice president, Tareck El Aissami, condemning the U.S. Department of the Treasury for sanctioning him as an official “Specially Designated Narcotics Trafficker” for his ties to drug organizations. In 2015, they bought a full-page ad defending its arbitrary detention of Colombians.

In a statement provided to Breitbart News, a New York Times spokeswoman confirmed that the advertisement followed their advertising policy:

We believe that the broad principles of freedom of the press confer on us an obligation to keep our advertising columns open to all points of view. Therefore, The New York Times accepts advertisements in which groups or individuals comment on public or controversial issues. We make no judgments on an advertiser’s arguments, factual assertions or conclusions. We accept advocacy/opinion advertisements regardless of our editorial position on any given subject.

Baloney! In 2012, anti-Islam activist Pamela Geller was turned down when she tried to purchase an ad styled to copy a vicious anti-Catholic ad that the Times published from the Freedom From Religion Foundation, arguing people should leave the Catholic Church and its “pernicious doctrine.” They argued it could put U.S. troops in danger in Afghanistan.

It’s always possible the Times gave the Venezuelan despots a deep discount from the usual six-figure rate…after all, they gave a deep discount to MoveOn.org for its smear of Gen. David Petraeus when he worked for President Bush in 2007. The late Noel Sheppard blogged then that the Times had turned down ads from Swift Boat Veterans for Truth (against John Kerry) in 2004, and also an ad from the National Right to Life Committee.