The Senate Intelligence Committee is preparing to question top Obama administration intelligence officials behind closed doors on Wednesday on their explosive assessment that officially accused Russia of meddling in the 2016 presidential election to boost then-candidate Donald Trump.

Comey, though, plans to skip the closed-door session Wednesday due to a “previously scheduled engagement,” his attorney said. 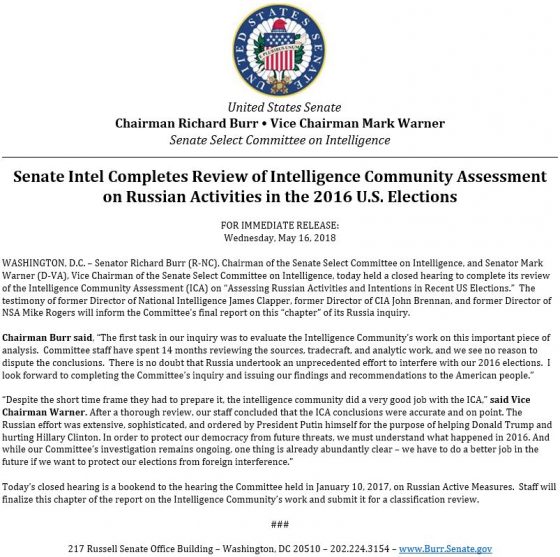 Sperry: House Intelligence Committee Chairman Devin Nunes next plans to investigate the role former CIA Director John Brennan and other Obama intelligence officials played in promoting the salacious and unverified Steele dossier on Donald Trump — including whether Brennan perjured himself in public testimony about it.

In his May 2017 testimony before the intelligence panel, Brennan emphatically denied the dossier factored into the intelligence community’s publicly released conclusion last year that Russia meddled in the 2016 election “to help Trump’s chances of victory.”

Brennan also swore that he did not know who commissioned the anti-Trump research document (excerpt here), even though senior national security and counterintelligence officials at the Justice Department and FBI knew the previous year that the dossier was funded by the Hillary Clinton campaign.

Last week, Nunes (R-Calif.) released a declassified memo exposing surveillance “abuses” by the Obama DOJ and FBI in their investigation of Trump’s ties to Russia. It said the agencies relied heavily on the uncorroborated dossier to take out a warrant to secretly surveil a Trump adviser in the heat of the 2016 presidential election, even though they were aware the underlying “intelligence” supporting the wiretap order was political opposition research funded by Clinton allies — a material fact they concealed from FISA court judges in four separate applications.

Nunes plans to soon release a separate report detailing the Obama State Department’s role in creating and disseminating the dossier — which has emerged as the foundation of the Obama administration’s Russia “collusion” investigation. Among other things, the report will identify Obama-appointed diplomats who worked with partisan operatives close to Hillary Clinton to help ex-British spy Christopher Steele compile the dossier, sources say.

“Those are the first two phases” of Nunes’ multipart inquiry, a senior investigator said. “In phase three, the involvement of the intelligence community will come into sharper focus.”

The aide, who spoke only on condition of anonymity, said Nunes will focus on Brennan as well as President Obama’s first CIA director, Leon Panetta, along with the former president’s intelligence czar, James Clapper, and national security adviser, Susan Rice, and security adviser-turned U.N. ambassador Samantha Power, among other intelligence officials.

“John Brennan did more than anyone to promulgate the dirty dossier,” the investigator said. “He politicized and effectively weaponized what was false intelligence against Trump.”

Several Capitol Hill sources say Brennan, a fiercely loyal Obama appointee, talked up the dossier to Democratic leaders, as well as the press, during the campaign. They say he also fed allegations about Trump-Russia contacts directly to the FBI, while pressuring the bureau to conduct an investigation of several Trump campaign figures starting in the summer of 2016.

Trump campaign Chairman Paul Manafort was wiretapped in addition to Trump adviser Carter Page during the campaign. (Page has not been charged with a crime. Manafort was recently indicted for financial crimes unrelated to the Moscow “collusion” activities alleged in the dossier.)

On Aug. 25, 2016, for example, the CIA chief gave an unusual private briefing to then-Senate Minority Leader Harry Reid (D-Nev.) in which he told Reid the Russians were backing Trump and that the FBI would have to take the lead in an investigation because the FBI is the federal agency in charge of domestic intelligence and, unlike the CIA, can spy on U.S. citizens.

Two days after Brennan’s special briefing, Reid fired off a letter to then-FBI Director James Comey demanding he open an investigation targeting “individuals tied to Trump” to determine if they coordinated with the Russian government “to influence our election.”

“The Trump campaign has employed a number of individuals with significant and disturbing ties to Russia and the Kremlin,” the then-top Democrat in the Senate added in his two-page letter.