Portland, OR looks like it’s turning into a smaller version of San Francisco these days. Keeping Portland weird are a bunch of aging hippies, radicals and leftists who are supporting Occupy ICE. They are protesting President Trump’s “zero tolerance” immigration policy and Occupy ICE is now spreading to other cities. This started in Portland Friday with about 40 tents and 100-150 people obstructing all entrances and exits. Portland Mayor Ted Wheeler has refused Portland police action against protesters and the ICE office closed temporarily. A team of Department of Homeland Security officers from the Federal Protective Service and Immigration and Customs Enforcement (ICE) entered the ICE federal building in Southwest Portland Monday morning to secure government property. 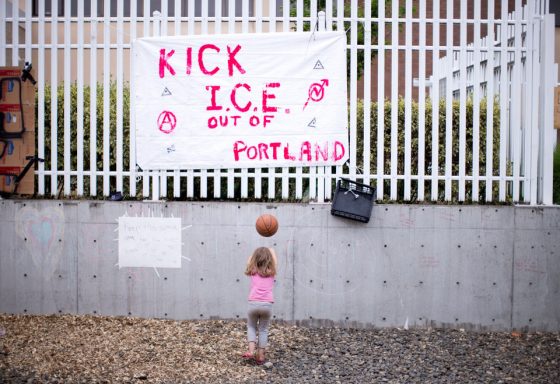 The occupiers say that they won’t leave until the Trump administration revokes its “zero tolerance” immigration policy. President Trump has reunited the few children on the border who actually have parents with them and he is not about to revoke his policy. In fact, Trump wants to forego the courts and adjudication altogether now and just immediately put these people on a bus or flight and send them back where they came from. I’m good with that. The left is howling over it.

Since Saturday, the number of protesters is growing substantially. They are blocking the entrance to the facility and shouting at drivers as they pass by, as well as blocking the road. And then there’s the moronic chanting and lame signs that go with all of this. They are heckling ICE employees and harassing them. These people are ill-informed and brainwashed by Marxists. Oh, and despite the press saying they are peaceful, they aren’t. Just ask the U.S. Border Patrol agent who reportedly broke his ankle on Saturday while trying to protect an older woman as protesters in McAllen, Texas attempted to stop a bus transporting illegal immigrants from one detainment center to another.

Standing outside of an entrance to the ICE building where protesters have created a barrier.#OccupyICE pic.twitter.com/lvwNai9Jeq

Earlier in the week, one Occupier was arrested after occupiers surrounded the vehicle of a departing employee. Tuesday night, DHS agents were called in to escort ICE employees out of the building. Operations at the facility have been suspended until “security concerns have been addressed,” ICE said in a statement. Antifa news aggregator “It’s Going Down” bragged in a celebratory post that the occupiers had evicted ICE. A member of Occupy ICE PDX stated, “We were able to shut down this facility. Although they say it is temporary, it will not be temporary. It’s another testament to what can happen when… regular people stop waiting for politicians and get together and actively make the change that they want to see in their community.”

Then last Friday, someone climbed a flagpole and removed the American flag in front of the ICE building and replaced it with a ‘Refugees Welcome’ flag. Nearby businesses and residential properties have had to resort to hiring private security. Things are being stolen and people are being attacked by these whack jobs. “Someone … came by and sprayed … poop,” a woman said. “That’s just mean.” At this rate, it’s only a matter of time until this explodes and there is violence in the streets.