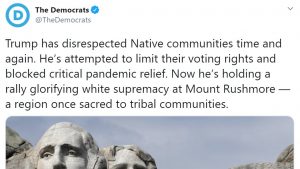 Realizing that the tweet was too transparent in revealing their naked anti-American bigotry and prejudice, the tweet was quietly deleted without clarification or correction within hours of its creation, around 10PM EST Monday night.

Mount Rushmore, which depicts the iconic American Presidents George Washington, Thomas Jefferson, Theodore Roosevelt, and Abraham Lincoln, has increasingly become a target of cultural ire from the cultural Left. Polling reveals that a strong majority of “very liberal” Americans already support its wholesale destruction on account of its “racism,” a sentiment that the Democratic Party’s leadership appears sympathetic to.