According to information from the IG report intel officials were unable to retrieve text messages from three devices belonging to Strzok and Page.

According to reports in 2018 Mueller’s team wiped ALL of the data from Peter Strzok’s iPhone after they determined it contained “no substantive text messages.”

The corrupt officials at the FBI did this.
Via Jordan Schacktel. 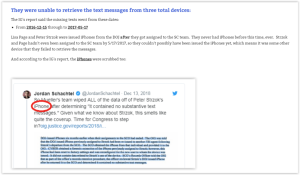 In an April 4, 2017 text message Peter Strzok tells Lisa Page his wife was on to them.