Going NeverTrump is not working out very well for Mitt Romney.  An NBC News/Wall Street Journal poll released Sunday shows that his net approval (“very positive” plus “somewhat positive”) has plunged to only 18% in the wake of his criticisms of President Trump, most recently his savaging of Trump over troop withdrawal from Syria, in the face of Democrat impeachment efforts.  The poll has a margin of error of 3.27% on a sample of 900 American adults.

Here is the Gallup data on Mitt’s approval since 2006: 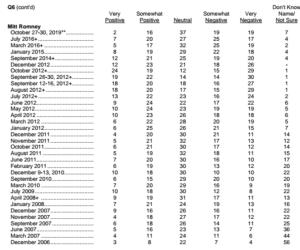 In recent polls, Mitt has lost both approval and disapproval, with neutral rising in support.  This probably means that he has gained little support from Democrats and liberals but has lessened his disapproval.