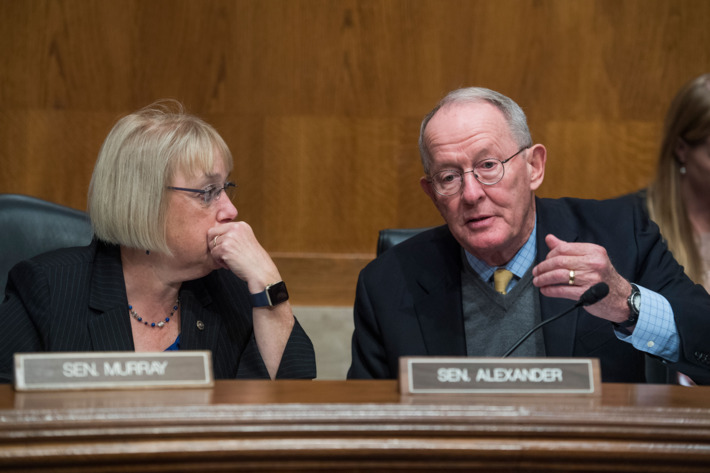 The congressmen discussed the issue Tuesday at the Conversations With Conservatives panel. The health care legislation was introduced by Sens. Patty Murray, D-Wash., and Lamar Alexander, R-Tenn., after multiple attempts of Senate Republicans repealing Obamacare failed.

Obamacare effectively told insurers to give low-income enrollees platinum-level coverage for the price of silver-level coverage, and promised to pay the additional cost (about 30 percent more) in the form of these back-door subsidies

The Alexander-Murray bill would essentially continue the cost-sharing payments for an additional two years to ‘stabilize’ the market and keep premiums ‘low.’”

All of the conservative congressmen present said they opposed the legislation, mentioning that health insurance companies do not need extra money.

“We haven’t cut taxes yet,” Rep. Jim Jordan, R-Ohio, said. “We haven’t repealed Obamacare yet. We haven’t started construction on the border security wall, but we’re going to bail out insurance companies? You got to be kidding me.”

Rep. Dave Brat, R-Va., pointed out the Senate failed to do any Obamacare repeal.

Brat said the bipartisan legislation “doesn’t reform Obamacare in any appreciative way.” He said a way to compromise would be to “stabilize the market” but still promote competition, which would lead to prices and premiums being lowered.

“A young kid coming out of college cannot buy a cheap insurance policy right now, so why is that?” Brat said. “If you answer that problem, then we’re open to that conversation, but right now, it’s a nonstarter.”

Rep. Matt Gaetz, R-Fla., said every piece of health care legislation that has come out of the Senate from both parties has avoided hurting the profit of insurance companies.

Murray and Alexander explained their reasoning behind the legislation in a joint statement.