Capitol Police reported that in the first two days of Supreme Court nominee Brett Kavanaugh’s confirmation hearings, close to 150 people were arrested, and Senate Majority Whip John Cornyn (R-Texas) summed it up by comparing the situation to “mob rule.”

On Wednesday evening, police issued a statement on the now 143 protesters arrested during the hearings that read in part, “The United States Capitol Police responded to numerous incidents of unlawful demonstration activities within the Senate Office Buildings that were associated with today’s Senate Judiciary Committee hearing.” 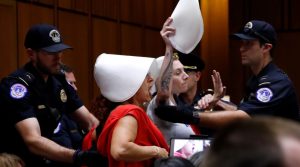