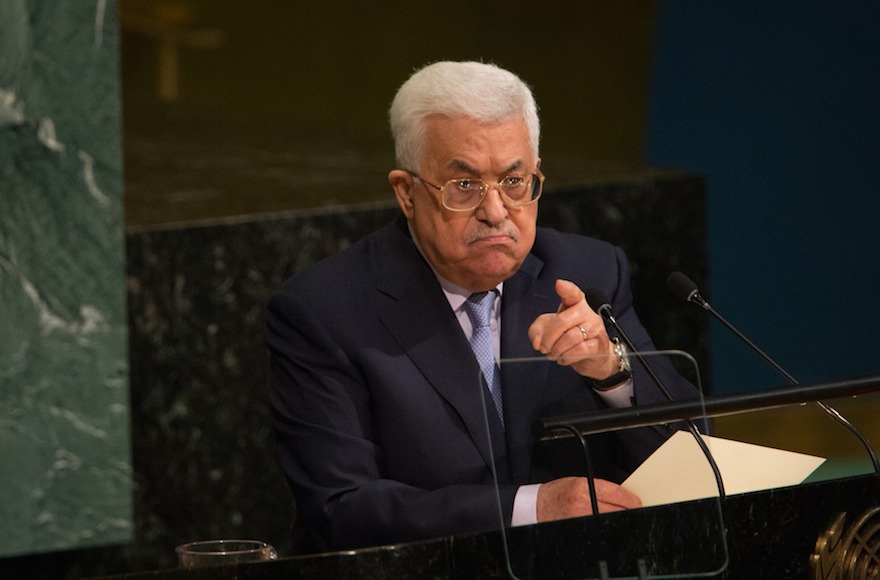 Palestinian Authority President Mahmoud Abbas received thunderous applause merely making his way to the podium in front of the United Nations General Assembly Wednesday. His reception was business as usual for the U.N., where the Palestinian cause is celebrated and Israel is obsessively demonized as an apartheid state.

Abbas is the personification of the rotten institution that is the United Nations, which has entire agencies and international holidays dedicated to the Palestinian national movement.

On the eve of the Jewish new year of Rosh Hashanah, Abbas spent most of his speech slamming the Jewish state, making sure to cloak his anti-Semitic fervor as mere “anti-Zionism.” The PA leader decried Israel’s “occupation” of his homeland: the “State of Palestine,” which has never actually existed in history.

“While we call to end the occupation, Israel incites and pretends there’s no Palestinian partner for peace,” Abbas claimed. But as Arutz Sheva reports, Israeli PM Benjamin Netanyahu has repeatedly offered direct talks with the Palestinians, only to continually have his offers rejected.

He also defiantly challenged the Trump administration’s call for the Palestinian government to stop funding terrorism. For decades, the Palestinian Authority has been shelling out hundreds of millions of dollars in stipends and salaries (much of it coming from U.S. foreign aid) to the terrorists and their families. By some estimates, Abbas’ government devotes about 10 percent of its annual budget to the “martyrs fund.”

Instead of making even the smallest of concessions to achieve peace, Abbas used his global stage to “salute” jihadists who have been convicted of murdering innocent men, women, and children.

“I salute our glorious martyrs and courageous prisoners in Israeli jails, and I tell them all that freedom is coming and that the occupation shall come to an end,” Abbas said before the General Assembly.

After mocking America’s efforts to rein in his terrorist payment program, Abbas borrowed President Trump’s campaign rhetoric — perhaps in an effort to cozy up to him. The PA chairman said “draining the swamp of colonial occupation of our land” is imperative to combat terrorism.

After his defiant acts against the U.S. and Israel, President Trump shockingly lauded Abbas as someone “working very hard” for peace.

“It’s a great honor to have President Abbas from the Palestinian Authority with us and his representatives, who have been working very hard with everybody involved toward peace,” Trump stated after his one-on-one meeting with Abbas.

But as the administration will soon find out, Abbas is not, and will never be, the peacemaker that President Trump is looking for. Abbas and his Fatah party have promoted, armed, and financed Islamic extremists since the birth of the Palestine Liberation Organization.

If America wants Israel to find a partner for peace, the terrorist-promoting Mahmoud Abbas is not that man.