A Public Broadcasting Service (PBS) host has a long history of anti-white racism and calling for the genocide of white people, evidenced by multiple Tweets sent from her personal account.

“We anti-whites are coming for you,” Lindsay Ellis Tweeted in 2017. “We know where you live.”

She then replied to her own tweet, saying that she gets “really excited about white genocide.”

“It’s going to be the best genocide ever,” according to Ellis. “I made a pinterest board for it.” 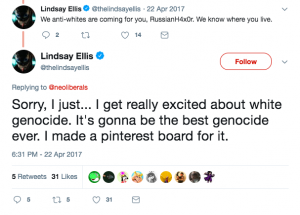 “It’s Lit! is a series of smart, funny video essays from PBS Digital Studios about our favorite books and why we love to read,” the show’s description says.