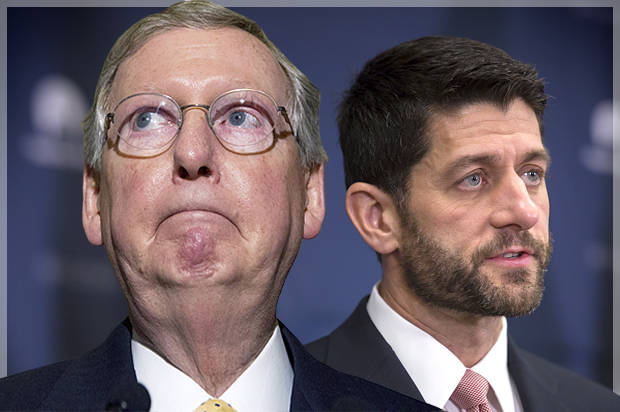 Senate Majority Leader Mitch McConnell and House Speaker Paul Ryan are now viewed as ineffective and unpopular by such a wide-swatch of the American electorate they poll somewhere below the left-wing extremist group Antifa.

A recent survey taken by McLaughlin & Associates in conjunction with The Center for Security Policy and the Eagle Forum, released Thursday, revealed that nearly two thirds of voters — 63 percent — believe that the time has come for new leadership in Congress.

A paltry 15 percent of those polled said “no” when asked if it is “time for new Republican Leadership in Congress which would mean replacing Senate Leader Mitch McConnell and Speaker Paul Ryan.” Nearly a quarter of respondents, 22 percent, were uncertain. A whopping 63 percent supported the notion of dumping the pair of GOP leaders.

But while only 15 percent of Americans appear to retain confidence in McConnell and Ryan, 21 percent of those polled by McLaughlin said they supported Antifa.

Senate Majority Leader Mitch McConnell has a difficult summer. After failing to pass the Obamacare repeal and replace bill, the Kentucky Senator’s poll numbers are plummeting. Surely, heightened friction with the President as of late isn’t helping.

McConnell’s score is worse than President Donald Trump’s or House Speaker Paul Ryan’s (R-WI), according to The Hill.

“Forty-nine percent of voters polled have a negative view of the Senate leader,” The Hill, which was given the poll results, reported.

On the other hand, President Donald Trump and Vice President Mike Pence have high approval ratings — 79 percent of Republicans have a positive view of the president, with 41 percent favorable and 55 percent unfavorable from the broader survey.

McConnell, who will not have to face reelection until 2020, only has an 18 percent job approval rating in his home state of Kentucky, according to another poll released this week by the left-leaning Public Policy Polling.

“McConnell is the only Republican elected official polled that is not viewed favorably by a majority of his own party,” according to The Hill.

President Trump’s approval rating in the Bluegrass State is at 60%.

The approval rating of Senate Majority Leader Mitch McConnell (R-KY) has plummeted to just 18 percent, a survey from Public Policy Polling has found.

The poll, which surveyed 645 Kentucky voters, found that just 18 percent of respondents approved of McConnell’s current performance, compared to 74 percent who disapproved. Seven percent of people said they were not sure.

McConnell, who is the longest-serving U.S. Senator in Kentucky history, having represented the state since 1984, was recently criticized by President Trump for failing to pass the healthcare reform bill through the Senate.